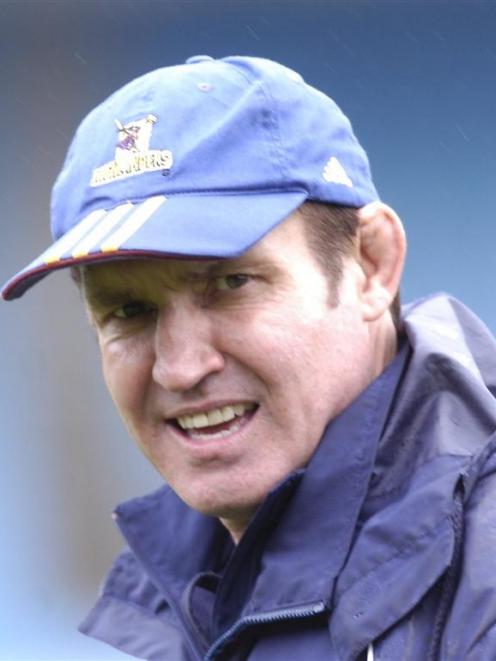 Glenn Moore
Highlanders coach Glenn Moore is demanding a better set-piece from his side in this weekend's do-or-die match against the Sharks in Durban.

Moore has made just one change to the side that started in last week's loss to the Stormers, with hooker David Hall replacing Jason Rutledge, although there is a doubt over No 8 George Naoupu.

Naoupu strained a hamstring against the Stormers and is rated a 50-50 chance by Moore to play.

A decision on whether he will play is likely to be made today.

If he does not make it, Steven Setephano will come into the team and Tim Boys will move on to the reserves bench.

Moore has also not decided on his midfield back reserve, with either Johnny Leota or Jayden Hayward to warm the bench.

A decision will be made closer to to kick-off.

Though Moore was cagey on the midfield back choice, he is clearly looking at the skilful Hayward to open up more chances, while Leota is more of a power player.

Whatever happens in the backline will depend on those up front and Moore did not hide his disappointment at the side's set-piece performance last week.

"Our set-piece last week did not operate at the level we expected and that put our whole game under pressure," Moore said.

"We have got to execute our set-piece well and and then we'll be able to put them under pressure. A good start is very important."

Moore said he had not made many changes, as some players had not had that many opportunities recently and they deserved a chance.

He agreed with All Black coach Graham Henry's call this week that differing referee interpretations were making many Super 14 games a lottery.

"In a lot of cases it is very hard to get a gauge on certain interpretations from some referees. As is the case, you have to adapt to them.

"But these rules they brought in around the breakdown was supposed to make it easier for the players and the referee. I'm not sure whether it has done that."

The Highlanders are in 10th place in the table, 11 points behind the table-topping Bulls, and appear a long shot to make the semifinals.

They first need to win, then take a bonus point with four tries, but Moore said they would not be attacking from everywhere, although they would be looking to use the ball.

"But we need to set a good platform first."

The Sharks are coming off the bye, which may play into the Highlanders' favour, as most teams have struggled this year after having a week off.

The Sharks welcome back classy first five-eighth Ruan Pienaar, who has missed the past month with of a knee injury.

He will have the talented Francois Steyn outside him, giving the side plenty of attacking options.

Winger JP Pietersen and flanker Jean Deysel also come back into the side after injury, though captain and lock Johann Muller is under an injury cloud and may be replaced by Albert van den Berg.

It was a great early birthday present for King, who turned 28 yesterday.

The Crusaders will be without concussed captain Richie McCaw for their Super 14 match against the Lions in Johannesburg on Sunday morning, NZPA reported.

After initially being named in the defending champions' starting line-up on Wednesday night, McCaw was ruled out yesterday morning in a significant setback to their chances.

During the 13-10 defeat of the Sharks in Durban two weeks ago, McCaw took a knock to the forehead, which had required stitches.

He received another knock below the eye during last weekend's surprise 20-13 loss to the Cheetahs.

McCaw has had ongoing problems with concussion throughout his career and was ruled out of the second-round match against the Brumbies in February because of a head knock.

Tasman's Jonathon Poff will get his first start in the No 7 jersey.

Blackadder has reinstated flanker Kieran Read, who will captain the side, lock Isaac Ross, halfback Andy Ellis and fullback Leon MacDonald for the Lions match after they were on the reserve bench for the Cheetahs encounter.