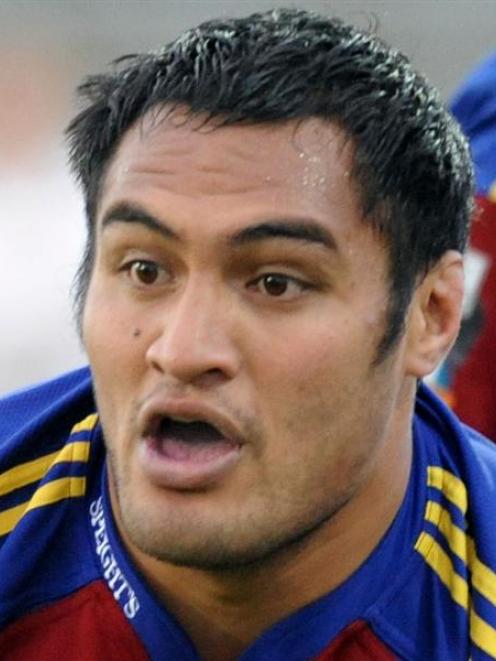 George Naoupu
Highlanders No8 George Naoupu believes a change in attitude and passion is needed for the side's match against the Stormers tomorrow night.

The Highlanders have made two changes in the pack to take on the Africans, with hooker Jason Rutledge coming in for David Hall, while lock Hayden Triggs swaps places again with Josh Bekhuis.

Coach Glenn Moore has resisted the urge to make wholesale changes to his team after a misfiring effort against the Blues last week, and continues to put faith in his players.

It will be Rutledge's first start of the Super 14 campaign, and is reward for a solid effort through the season.

He was effective when he came on for Hall last week against the Blues, when Hall was sent to the sin bin in the first half.

Rutledge has shown plenty of energy when getting on the paddock and his driving around the ruck should get the Highlanders on the front foot, something sadly lacking last week.

Triggs for Bekhuis is basically a straight swap, with Bekhuis playing the last two matches after Triggs played well in the impressive victory over the Bulls.

Moore has retained the same backline for the must-win clash and will need the attack to fire, as bonus points are vital if the side is to have any hope of making the semifinals.

The Stormers are due in the South late today and they have a list of walking wounded.

Naoupu believed the Highlanders were slow to react last week, and there was pressure on the players to perform.

"They [Blues] blew us away, especially in the contact area, and we need to bring our game back up to the level when we played the Bulls and the Cheetahs," Naoupu said.

"Our defence just can't be compromised and our attack needs to be accurate and direct."

Naoupu said coach Moore had put it to the team to show some character and bounce back from the display against the Blues.

"That is what it is all about, having the passion and the attitude to come back against the Stormers.

"Every game now is a must-win and we really want to go to Africa with a good feeling and knock off some teams over there."

Naoupu has made an impact in the side since getting a start against the Cheetahs a month ago, and was enjoying getting some playing time, ahead of fellow No 8 Steven Setephano.

"We are pretty much similar players and we both push each other along in training."

Naoupu (25) is in his first full year of Super 14, and said he was enjoying the faster pace of rugby, which was a step up from Air New Zealand Cup level.

He said the siblings often talked about the pressures of top-level sport and both had aims of representing their country.

His sister, just 19, was a national under-21 representative, while the rugby-playing Naoupu had made national age-group sides.

They both wanted to make the leap to senior national sides.

Originally from Christchurch and now based in Hawkes Bay, Naoupu, being the oldest of six children, has sometimes been the one to hand out advice.

That is continuing with the Highlanders as he is flatting with young backs Jayden Hayward and Israel Dagg.

"It has its moments," he said. "I'm pretty much a bit of a dad to the two of them. But I'm always happy to point them in the right direction."