"I’ve got a calcified spine and I can’t bend over, so I pick up the ball with the tongs and then I can play." 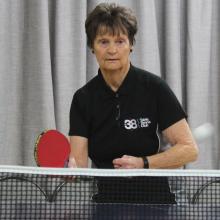 Mosgiel Table Tennis organiser June King gets ready to strike.
He is one of about eight players who regularly gather at the Taieri Bowling Club for two hour ping-pong sessions on Tuesday and Thursday afternoons.

Mosgiel Table Tennis organiser June King said the sessions had been taking place once a week on a Tuesday for the past few years.

The Level 3 and 4 lockdowns caused a pause in play for a time, but when the sessions resumed they became so popular a second session was added on a Thursday, Mrs King said.

"It is mostly older people, but they love it."

Table tennis was a sport for all ages for both social and competitive play, she said. 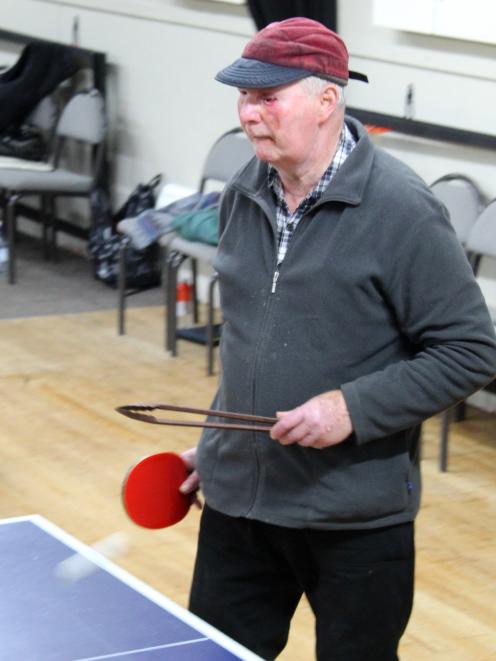 "It is just great. Most of them probably played when they were younger and they can come here and play at their own ability."

She began playing table tennis as a child but took a break from playing for about 20 years while bringing up her family, Mrs King said.

She resumed playing when she and her husband moved to Invercargill, first playing social games but then moving on to competitions, and she was also instrumental in organising table tennis events.

The Mosgiel group was very social and supportive of others, Mrs King said.

Many had local connections to Mosgiel.

"They talk about olden days, you know, and it is just great."

— Mosgiel Table Tennis takes place from 3pm-5pm on Tuesdays and Thursdays at the Taieri Bowling Club. Email pingpong@xtra.co.nz for details about joining.