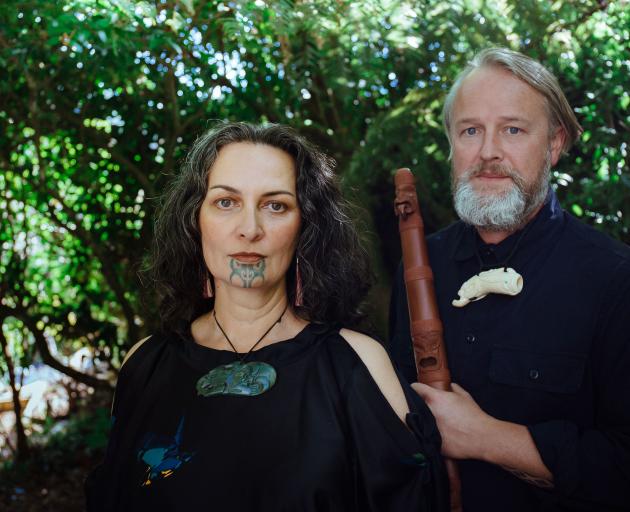 The Celebrating Matariki-Whakanuia Matariki concert, to be held this Saturday night from 7.30pm at Dunedin Town Hall, will reflect the importance of the stars to Matariki, as well as its themes of renewal and remembrance.

As is fitting, the work of New Zealand composers will be highlighted in the programme, including taonga puoro concerto Ko te tatai whetu by Tikao and Phil Brownlee, to be performed by Tikao and Fraser.

The lyrics of Ko te tatai whetu come from a moteatea (traditional chant), passed on to journalist and ethnologist Herries Beattie by Tikao’s great-grandfather Teone Taare Tikau and held in the Hocken Library.

In three movements, the work tells the moving story of Hinetitama transforming herself into Hinenuitepo, and telling Tane to return to earth to raise their children and place the stars in the sky.

"The first part to me is like storytelling, it is fairly slow and heartfelt," Tikao said.

After the second part reveals Hine’s instructions, the third part is slower and dreamlike.

"To me it is the feeling of gazing up at the night sky, full of wonder at its beauty."

Tikao is also excited to be performing a new arrangement of her waiata Matariki during the concert.

Excitement will also be high for Dunedin composer, musician, and music lecturer Maddy Parkins-Craig, whose piece New Mountain will have its world premiere in Saturday’s concert.

New Mountain was inspired by a trip over the Crown Range, with the stars twinkling in the night sky through the mist, and reflecting on the memory of a recently lost loved one.

The five-minute piece uses rhythms, texture and dynamics to created a minimalist sound world that constantly moves and oscillates.

Works by other New Zealand composers also feature in the concert, including Gillian Whitehead’s Matariki, and Charles Royal’s Matariki.

Saturday’s concert will also feature Gustav Holst’s massive The Planets, in which each of seven movements is named after a planet of the solar system and the full palette of orchestral colour is used to suggest their astrological characters.