The family that runs together . . . 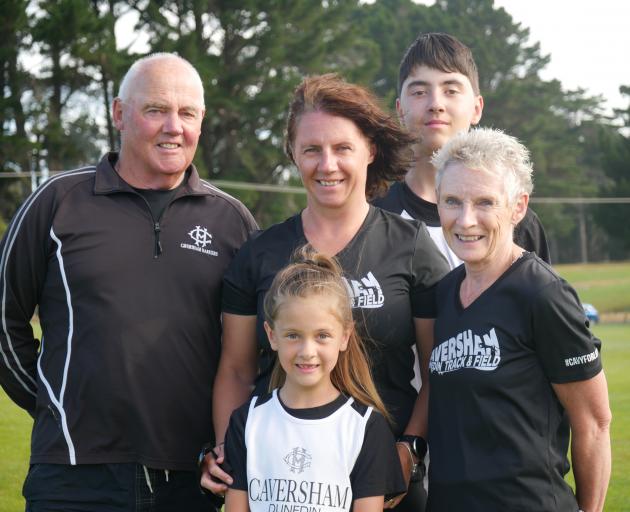 Malcolm and Claire Giles, their daughter Paula Cotter, and grandchildren Patrick and Sammy are all members of the Caversham Harrier and Athletic Club.

Claire joined the club in 1965, after the Greater Green Island athletics club disbanded due to a lack of members.

Heading over to Caversham was a no-brainer — she started out there and her father and siblings were already in the club.

‘‘It was logical to come here when Green Island closed,’’ Claire said.

‘‘I was the last member of my family to start harriers because I always played netball during the winter time.

‘‘Once I had given up netball I went back to Caversham.’’

Malcolm and Paula joined the club in 1987, and Paula’s children followed when they were old enough.

These days, Claire competes in a little bit of everything year-round, while Malcolm is a coach, official and social harrier.

Malcolm started coaching Paula when she was 7 and he became an official shortly after.

He also coaches other members of the club, including grandson Patrick.

Paula prefers the throwing disciplines — shot put and discus — and runs in the harriers.

Claire said it was nice to run alongside her daughter.

The pair sometimes train together but are rarely competitive.

‘‘We just try to get the best out of ourselves, rather than having to compete with each other.

Sammy is the latest family addition to the club.

Claire said Sammy was always smiling when she was running around the track.

Paula said Sammy wanted to join from a young age, after being around the sport for so long.

Her favourite events are discus and shot put too, as are Patrick’s.

Claire said there was a family-friendly atmosphere at the club and many of the members were relatives.