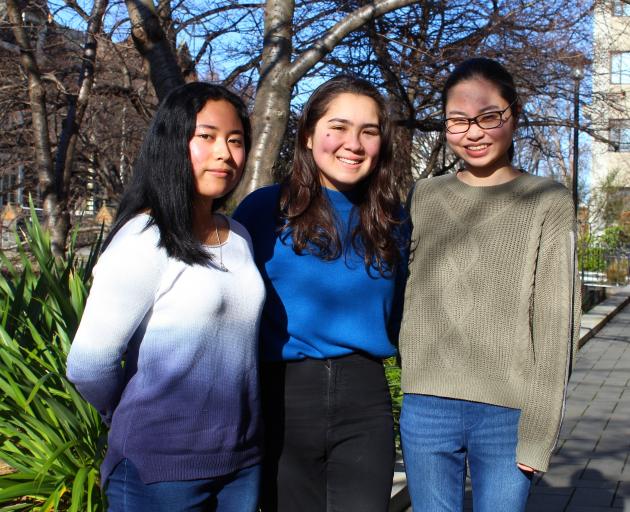 Otago University Japanese Student Association members (from left) president Justine Klassen, vice-president Amy Hashimoto Krammer and committee member Haruna Ohhara say Hiroshima Day is about remembering lives that were lost. PHOTO: SIMON HENDERSON
It was August 6, 1945, at 8.15am when US B-29 bomber Enola Gay dropped an atomic bomb on the Japanese city of Hiroshima.

Three days later a second bomb was dropped on Nagasaki.

These tragic events are remembered on Hiroshima Day.

Miss Hashimoto Krammer said this commemoration had taken place around the world every year since 1945.

As well as remembering the lives that were lost as a result of the Hiroshima and Nagasaki atomic bombs, the day was also about calling for world peace and a nuclear weapon-free world.

The bombings were a "horrific act".

"We just, obviously don't want that to happen ever again."

Otago University Japanese Student Association presidentJustine Klassen said it was important to pass down the stories from previous generations because the bombings continued to have an effect.

"Hibakusha" was the word used to describe the people affected by the bombings of Hiroshima and Nagasaki.

There were still people alive who continued to deal with illness and other after-effects of the attack, she said.

Miss Hashimoto Krammer said an important fact was nuclear weapons were still being made in the world today.

For decades Hiroshima mayors have written a letter of protest every time a nuclear test is conducted, she said.

In February, the mayor also wrote a protest letter to Russia’s president Vladimir Putin in strong opposition to Russia’s recent invasion of Ukraine and rhetoric implying the use of nuclear weapons.

If rainy it will be relocated to Church of the Holy Name, 420 Great King St — check the National Centre for Peace and Conflict Studies Facebook page for updates.