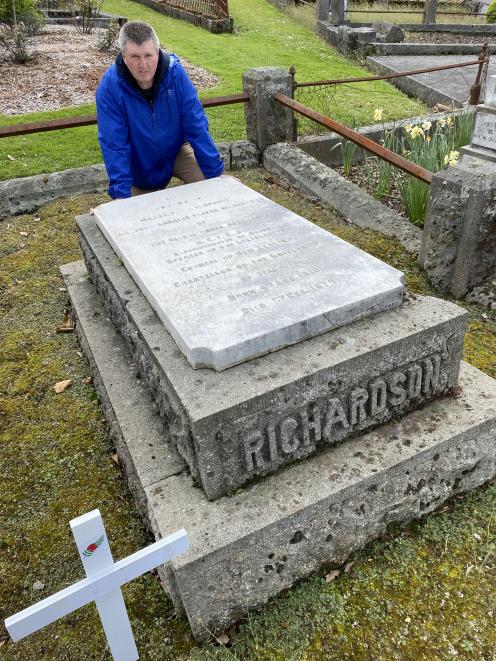 Dunedin military historian Peter Trevathan visits the grave of Major the Honorable Sir John Larkins Cheese Richardson in the Northern Cemetery, which he is keen to restore. PHOTO: BRENDA HARWOOD
The tranquil surroundings of Dunedin’s Northern Cemetery are a peaceful resting place for one of Otago’s most prominent early citizens and military pioneers.

The grave of Major the Honourable Sir John Larkins Cheese Richardson (1810-1879), formerly of The Bengal Horse Artillery, Superintendent of Otago, Speaker of the Legislative Council of New Zealand, and Chancellor of the University of Otago, has caught the interest of military historian Peter Trevathan and the Otago Military History Group.

‘‘Sir John had an extraordinary life, and it would be good to see his grave restored in honour of him,’’ Mr Trevathan said.

‘‘The headstone has fallen over, and the grave site could generally do with some restoration. We are also planning to create an information panel.’’

Before progressing the project, the group would like to contact Sir John’s descendants to gain their support.

The Southern Heritage Trust and the Otago Military History Group are working to establish an Otago Military Tour, which would include grave sites in the Northern and Southern Cemeteries, historic gun emplacements, and archaeological sites across the area.

They hope to include the Northern Cemetery graves of Sir John Larkins Cheese Richardson, World War 2 casualty Able Seaman Ian Grant, and dozens of others in the military tour.

The group was pleased to have finished restoring the memorial site at Upper Junction, and hoped to also restore the military archaeological site at Tomahawk and others, Mr Trevathan said.

Major the Honourable Sir John Larkins Cheese Richardson was born in India, and joined the Bengal Horse Artillery in 1839. He fought in the Afghanistan campaign of 1842 and the First Sikh War of 1845-6.

After resigning his commission, the father of three eventually settled in Otago, where he helped to found volunteer rifle companies in the 1860s and brought the Royal East Surrey Regiment the 70th Foot to Dunedin.

He was elected to the Otago Provincial Council, serving as Superintendent during the gold rush years of the 1860s, and eventually became a Member of Parliament and Speaker of the Legislative Council. 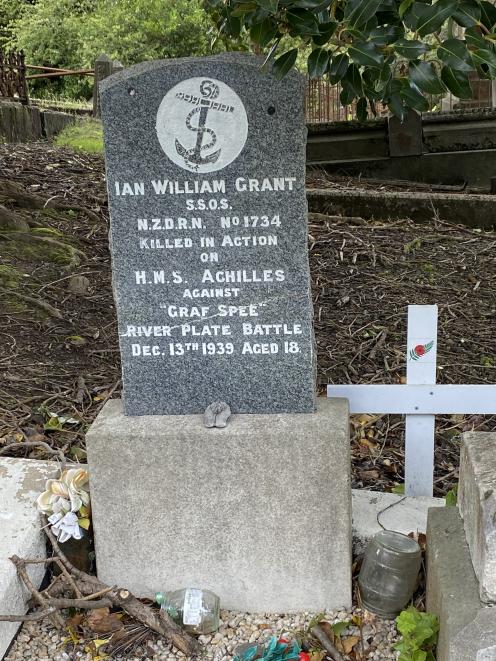 he Northern Cemetery memorial for Ian William Grant, who was killed in action at the Battle of the River Plate in World War 2.
A champion of female education, Sir John became Chancellor of the University of Otago and helped ensure that it opened its doors to women.

Born in Dunedin in 1921, Able Seaman Ian Grant joined the NZ Division of the Royal Navy in 1939 and served aboard HMS Achilles.

During the famous Battle of the River Plate, in December, 1939, when HMS Achilles and two other cruisers fought and critically damaged the massive German warship KMS Graf Spee, the 18 year-old Grant was killed by shrapnel.

His was the first New Zealand death in uniform during World War 2, and he was buried at sea.

The Otago Military History Group is keen to restore Grant’s grave in the Northern Cemetery and create an information panel.

●Any descendants of Major the Honourable Sir John Larkins Cheese Richardson and Able Seaman Ian Grant are invited to make contact with Mr Trevathan and the group via email to petebond058@hotmail.co.nz

●Efforts to contact the family of Crimean War and American Civil War veteran Captain Sydney Herbert Davies, his wife Mary and other family members — whose grave is also in the Northern Cemetery (The Star, June 10, 2021 page 7) — failed.