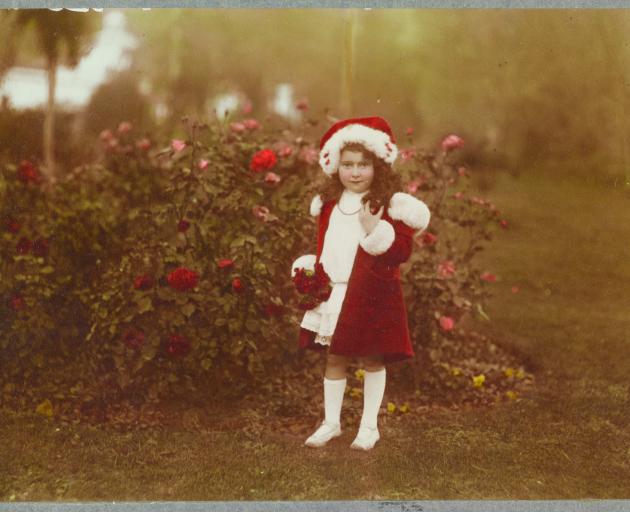 The Star is hoping to uncover the identity of a girl who posed for Dunedin photographer E. A. Phillips. PHOTO: HOCKEN COLLECTIONS
It could be a young girl dressed as Father Christmas or it could simply be a little girl with an expensive coat.

But the picture of a girl standing in a rose garden provides a glimpse of  the early days of photography.

He was a prominent professional photographer who in 1929 set up a studio at 750 Great King St.

Phillips remained active in the city until about 1950 and died in 1966,  Dr Petersen said.

The photo of the little girl, wearing an expensive fur-trimmed red coat and hat, was inside an album given to the Hocken by the photographer’s widow in 1968.

The album had the title Studies in Colour Photography embossed on the cover and was able to be viewed at the Hocken Library in Anzac Ave. 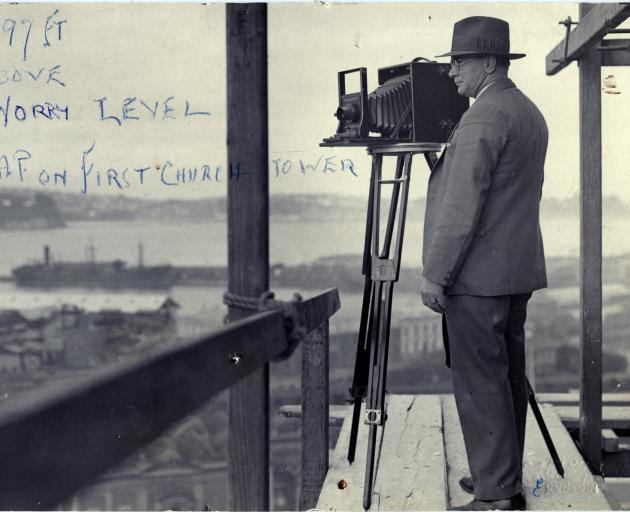 Dunedin photographer E. A. Phillips takes in the view standing on scaffolding surrounding First Church of Otago c.1940. PHOTO: HOCKEN COLLECTIONS
"It looks like it could have been a sample book for prospective customers," Dr Petersen said.

The photo of the girl was hand-tinted, and Mrs Phillips identified a Miss Fogharty as the hand-colourer, but there was no information about the girl.

The album also contained photographs of two big houses. One was the Glendining estate called Nithvale, in North East Valley. The other was the Broad family home, Willard, built in what is now Cosy Dell Rd.

When the album was itemised in 2008 the cataloguer described the photo as a girl dressed as Father Christmas. However, Dr Petersen said she did not think that was the case. Rather, it was just an assumption made by whoever itemised the album.

In the same album there was a photograph of a boy dressed in an Eastern-looking outfit, which possibly led to that interpretation.

The Star is hoping to uncover the identity of the mystery girl who posed for the photograph in about 1929.

Contact star@thestar.co.nz if you think you know who it is.