Learning software a labour of love 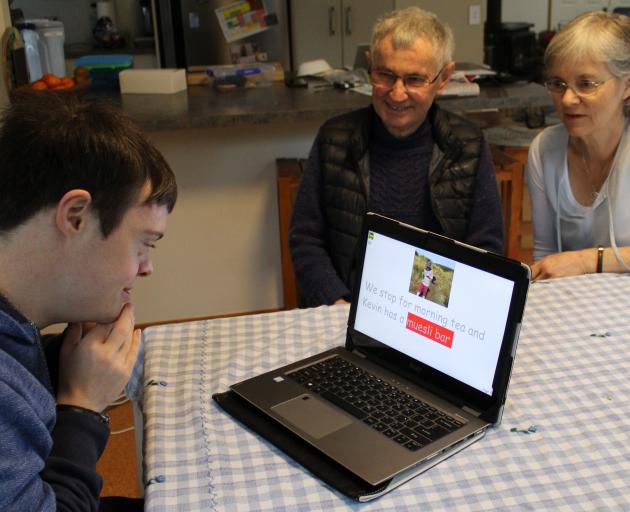 Kevin Geddes enjoys daily learning sessions using software developed by his parents Trevor and Helen Geddes. PHOTO: SIMON HENDERSON
A series of software programmes developed by Helen and Trevor Geddes, of Bellknowes, has been a labour of love.

When their son Kevin Geddes was born with Down syndrome and later developed autism, they used their combined experience to devise a learning environment to suit his challenges.

Trained teacher Mrs Geddes and physicist and computer programmer Dr Geddes began their journey about 25 years ago, when their son was 4.

Looking for software tools to help teach Kevin language skills, they struggled to find suitable material, so began devising their own programmes.

Visual learning was often an effective way to learn for people with Down syndrome and autism, so an obvious tool to use was computers, Dr Geddes said.

He began looking for software and found almost nothing available so he began developing his own versions, starting with his former authoring platform Macromedia Director.

Over the years he developed programmes including an alphabet programme, story writing and reading software and vocabulary software.

The combination of his programming skills and Mrs Geddes’ teaching skills enabled them to devise software packages that were educational and effective.

Versions of their software have been used in countries including the United States, Malaysia, Bangladesh, Hong Kong, China, and Myanmar, helping thousands with learning difficulties.

Being parents to Kevin had been ‘‘a huge blessing in our lives, and in the lives of a lot of people’’, Mrs Geddes said.

‘‘It has been very interesting, at times very challenging, I think the disability world is quite challenging, but also fantastic.

‘‘We would never trade it for anything else.’’

The number of children born with Down syndrome was ‘‘plummeting’’ in New Zealand, probably because of the availability of simple blood screening tests.

‘‘I think it is much more difficult for families now if they know they have a little one with Down syndrome to think that this is a good option to keep the baby and to cherish that life,’’ Mrs Geddes said.

But she had never met a parent who had a child with Down syndrome who was not grateful in the end.

Most people with Down syndrome were ‘‘very nice natured’’, Dr Geddes said.

‘‘And they actually enhance people around them.’’

The conference will take place throughout the month and feature online sessions including New Zealand and international speakers covering topics including education, health, speech, relationships, ageing and legal issues.