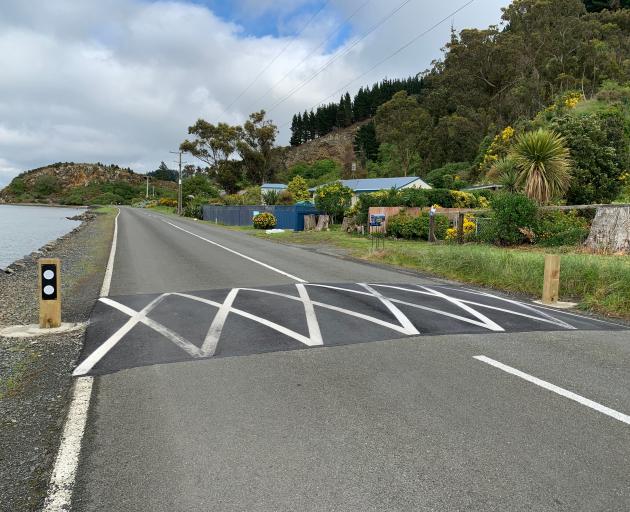 One of the new permanent speed humps, installed recently by Dunedin City Council on Aramoana Rd in the Te Ngaru settlement. PHOTO: TRACY FLEET
The West Harbour Community Board welcomed its newest member before getting down to business at last week’s regular meeting.

Kristina Goldsmith was elected to the board in a recent by-election held to fill the board vacancy left by the late Jan Tucker, who died earlier this year.

Ms Goldsmith read a declaration, as required under the Local Government Act 2002, as last Wednesday’s West Harbour Community Board meeting got under way at Port Chalmers Bowling Club.

In the public forum, Te Ngaru Community representative Tracy Fleet reported to the board that planned speed humps had been installed on Aramoana Rd.

Ms Fleet shared the history of the project, which dated back to 2017 and was instigated by a core group of residents with concerns about drivers speeding through the township.

‘‘However, after that, they started to be vandalised and stolen, so became ineffective.

‘‘That was when the residents campaigned to get permanent speed humps put in,’’ she said.

Mrs Fleet she was ‘‘now very pleased to report’’ that the last of the new, permanent speed humps had been installed a couple of weeks ago.

The eight permanent speed humps have been placed about 130m apart to achieve the desired 50kmh speed zone for the area. ‘‘The residents of Te Ngaru are generally very happy, and they are very effective — we are feeling a lot safer,’’ she said.

‘‘The DCC have done a great job — it [Te Ngaru] looks like a nice little township now.’’

West Harbour Community Board chairwoman Francisca Griffin praised Mrs Fleet’s hard work on the project, which had included making sure the entire local community was consulted.

The toy library, which had lent toys for children aged from 0 to 8 years to West Harbour families for more than 20 years, owned its building.

The funds would go towards a $4000-plus urgent repair job, to replaced rotten and damaged fascia boards, install new spouting, and replace a water-damaged toilet ceiling, Ms McCulloch said.

‘‘It is important that we do this maintenance, so we can continue to provide our service to the 24 families from Ravensbourne to Long Beach who are currently on our books,’’ she said.

Later in the meeting, the West Harbour Community Board agreed to provide $1500 to the toy library for the project.

The meeting ended with a presentation from the Sims Building Action Group, from which the public and media were excluded.