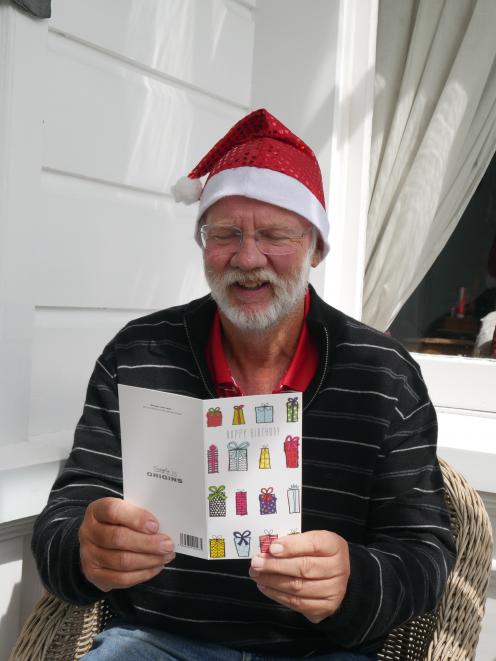 ‘‘Our family joke was that I was born between the main course and dessert,’’ he said, laughing.

Mr Rust said the most intriguing thing about his birthday was other people’s reaction to it.

When he told people his date of birth, most responded with a discernible pause or told him how unlucky he was, he said.

‘‘I think it’s kind of weird that strangers feel it’s OK to comment on your birthday because it’s Christmas.
‘‘And yet it’s really just one random day out of 365, in terms of your birth.’’
Mostly he did not mind, and often joked about being Jesus Christ.
A Christmas birthday was not as bad as people thought, and had some upsides.
Now retired, Mr Rust did not work on his birthday, nor do a shout for his colleagues.

‘‘Only once in my life have I ever worked on Christmas Day and that was fruit picking in the Cromwell Gorge when I was 16.’’
It did not seem to affect the number of presents he got as a child either.
In hindsight, perhaps his parents — who were working class and lived in North East Valley — sometimes overcompensated to make up for it, he said.
He had never had a birthday party on his actual birthday, but he did not mind.
‘‘If you’re going to be resentful, who are you going to be resentful to?
‘‘Your mother? Your father?’’
These days, Christmas Day is spent with his adult children and four grandchildren.
It was a novelty for his grandchildren that Christmas was also his birthday but, for
him, the day was more about them.
‘‘It’s more fun watching them at Christmas than feeling ‘oh this is my birthday’.’’