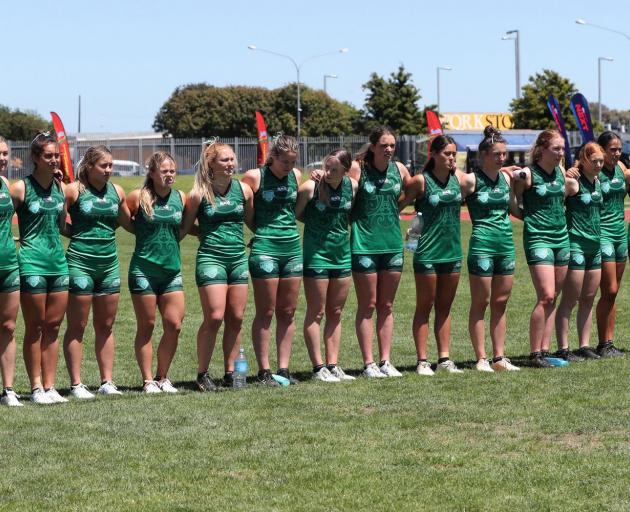 The Te Waipounamu touch team lines up for one of its games on Saturday. PHOTO: AUCKLAND SPORTS PHOTOGRAPHY
Despite a tough loss in the Premier Touch League women’s final, Te Waipounamu players showed character and strength, their coach says.

Representing the South Island, the team played in the semifinal then final of the Premier Touch League in Auckland on Saturday.

Te Waipounamu beat the 07 Heat, a Waikato-Bay of Plenty team, 8-6 in the semi despite a slow start.

Coach Damian Burden said the team was down by two tries before putting on a "comprehensive" performance in the second half to win.

With the satisfaction of achieving their goal of making the final, players were in a good head space before the decider against the Manukau Raiders.

The teams had met twice before in the series, where Te Waipounamu drew and lost.

When it came time for the final, the Raiders had a solid start and scored tries early.

"They had an awesome first half," Burden said.

"We had a couple of crucial errors and a couple of missed opportunities that had a bit impact on the scoreboard."

The Raiders scored late in the first half, so Te Waipounamu faced an "uphill battle".

Despite that, the players showed real character and composure in the second half and started strong.

"Our talk at half time was about completion rate and being really clinical with what we did to make sure that we stayed in the fight for the rest of the game."

The team had a better second half, utilising its scoring opportunities and defending well, but could not peg back the deficit as the Raiders continued their sharp performance, winning 11-7.

"While it was disappointing to not win the final, in hindsight we can look back and be proud of our achievements as a team."

Making the final and being a strong, competitive team was pleasing, as was the individual growth shown by players.

As a result, some players were picked to trial for the women’s national side, the Touch Blacks.

"As a franchise we were really proud of the growth of our players and the character that they showed."

Burden was impressed with the team’s semifinal comeback and the determination it showed to keep fighting in the final.

The team’s most valuable players were Maia Joseph and Janelle Cavanagh, and the rising star awards went to Brooke McAlwee and Annie Timu, both St Hilda’s Collegiate School pupils.