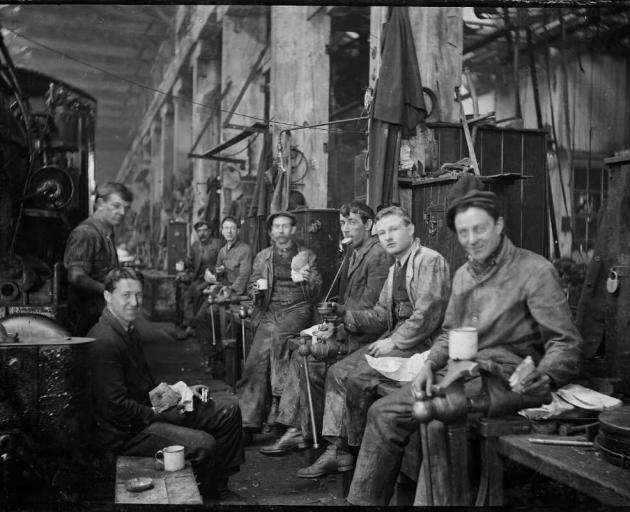 A group of men takes their lunch break, seated in one of the Hillside Railway Workshops, circa 1926. PHOTO: ALBERT PERCY GODBER/NATIONAL LIBRARY OF NEW ZEALAND
From Victorian beginnings, Dunedin’s Hillside Workshops are undergoing a renaissance with an $85million investment from the Government in this year’s budget, which builds on about $20million of investment made in 2019. Reporter Simon Henderson looks back at the history of the South Dunedin site.

Talk about being on the fast track.

When it comes to the history of the Hillside Workshops, there was no chugging along.

Instead, progress was faster than a bullet train. Dunedin Railway Department locomotive superintendent Alexander Armstrong  described the beginning years of the workshop at his leaving presentation in September 1880, published in the Otago Daily Times.

There  was plenty to keep them busy in the erecting shop where trains and wagons were assembled, as well as carpentry and iron workshops.

Accidents and injuries were not unknown at the heavy industry site.

The North Otago Times reported in 1879  that a railway guard, Arnold Collett, died from his injuries a few days after two wagons ran into a train at the Hillside Workshops.

Later the same year, railway workman William Little had the toes of his left foot crushed when a carriage passed over it.

In 1880, 23-year-old William Jameson was killed instantly by a train conveying workmen to the Hillside Workshops.

The ODT reported in 1881 that a labourer called Hugh Johnston suffered a severe scalp wound after he fell from a scaffold on to iron castings.

In 1884 a foreman blacksmith called Leonard Monk was blinded in one eye when a particle of iron flew off a planing machine as he was walking by.

There were happier occasions as well. In 1887 the Evening Star reported on the first anniversary concert of the Hillside Workshops Brass Band at Clarkes Hall in South Dunedin.

The band as well as soloists were given an encore, and the Masters M’Kechnie danced the Highland Fling to great applause before the evening concluded with about 30 couples gracing the dance floor.

Over the years the workshops had shifting fortunes.

By the 1940s about 1200 employees were employed, but by 2012 the ODT reported on partial closure of its Hillside Engineering Workshops and the redundancy of 90 out of about 115 staff.