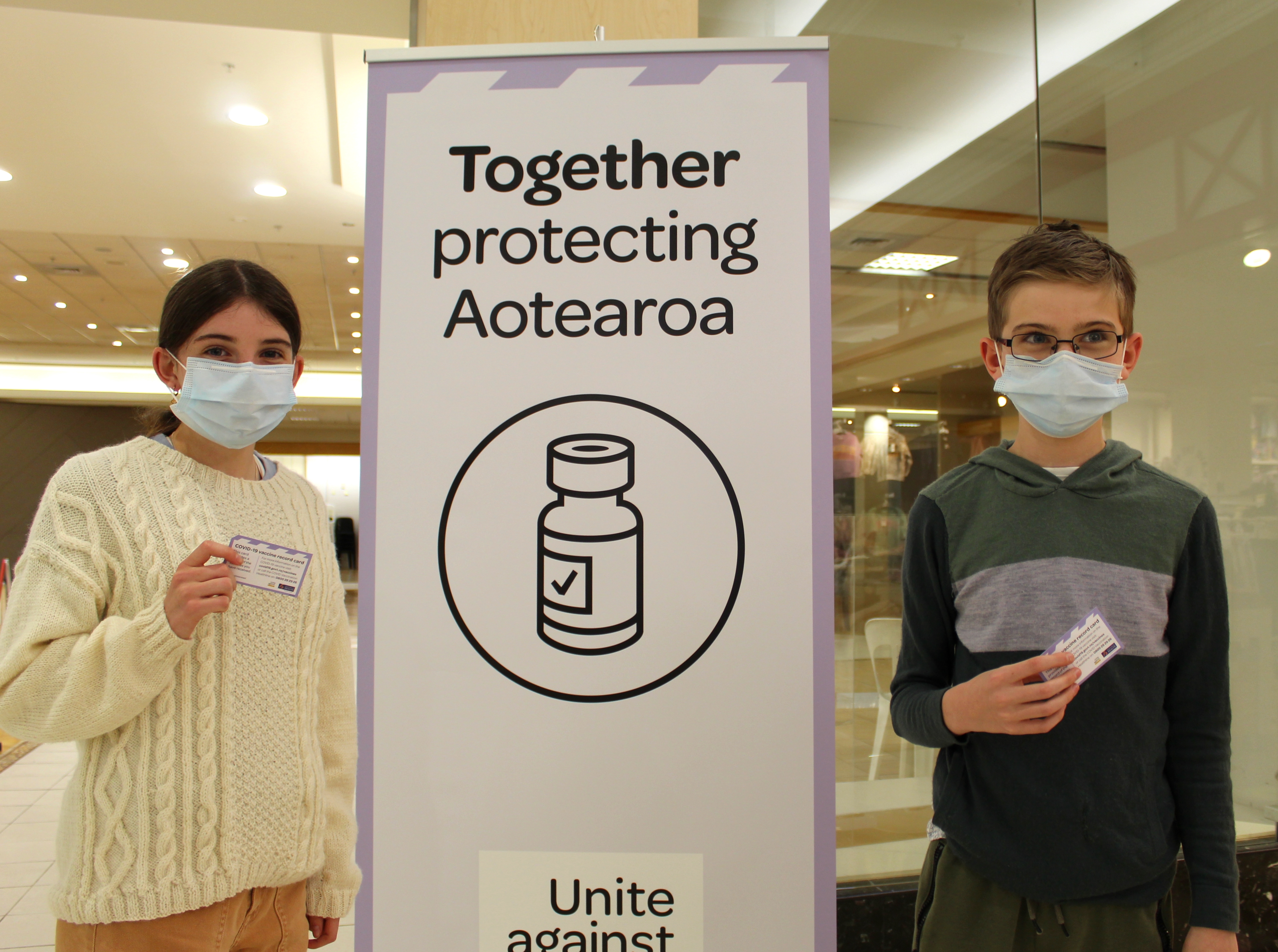 Protecting the country . . . Siblings Sophia Body (14, left) and Christopher Body (12) get their second Covid-19 vaccine at the vaccination clinic at Meridian Mall run by Southern DHB. PHOTO: SIMON HENDERSON
Prime Minister Jacinda Ardern has put out the call to ‘‘roll up your sleeve for New Zealand’’, as the country gears up for the Super Saturday mass vaccination event.
The Star is getting behind this effort, so come on Dunedin, let’s all play our part in protecting the people we love and the things we love to do!
A pop-up vaccination clinic in the Octagon will be one of dozens of places to get the jab this weekend, as Dunedin plays its part in the giant ‘‘Super Saturday’’ vaccination push.
New Zealand Prime Minister Jacinda Ardern has announced a nationwide ‘‘Vaxathon’’, to be televised and streamed online, as the country races to reach the 90% vaccination milestone and beat the Delta outbreak.
Dunedin Mayor Aaron Hawkins said the vaccine was ‘‘the single best tool we have to support our social and economic wellbeing’’.
‘‘It’s safe, it works, and you don’t need to make an appointment to make it happen.’’
With the Government changing its Covid-19 strategy, the country was now in a race between the virus and the vaccine which would limit its spread.
‘‘We can’t afford to let this swamp our public health system, or put our unprotected children at unnecessary risk.’’
He was proud of Dunedin’s vaccine rates, but said they were not evenly spread across the city.
‘‘That’s why the work of Te Kaika and others in taking it out to people has been so important.’’
Mr Hawkins hoped Super Saturday would help reach some people who had not yet had their first dose and that others would take the opportunity to move their second dose forward.
The Dunedin City Council is working with the Southern DHB and Business South to provide a pop-up vaccine clinic in the Octagon for Super Saturday, from 10am to 3pm.
Te Kaika’s mobile bus will be parked up for the duration and there will be free ice creams and live music at the event. Extra mobility parking will be provided in the area.
Southern District Health Board vaccination programme lead Hamish Brown said Super Saturday would be a chance to give vaccinations another boost while also celebrating the achievements of the programme so far.
‘‘Our overarching message for people is protect the people you love and the things you love doing by getting yourself vaccinated,’’ he said.
‘‘It will also be a chance to connect with some hard-to-reach groups, and to encourage people to engage with the vaccination programme in a slightly different way.’’
The Southern region is at the forefront of the vaccination race, with 88% of people having had their first dose and 69% fully vaccinated in Dunedin City.
‘‘We have built a strong network of providers who have really pushed to make the programme a success,’’ Mr Brown said.
Southern DHB chairman Pete Hodgson said it was known from overseas and from the Auckland outbreak that the virus would ‘‘settle wherever we give it an opportunity’’.
‘‘This could be amongst young people, Maori and Pasifika, or in any of the many hamlets we have throughout Otago,’’ Mr Hodgson said.
‘‘And once it settles, it can emerge again when it’s ready, to reinfect neighbouring areas.
‘‘So it is very important that we don’t give it the chance to settle in the first place — and that is the underlying reason why we need a high vaccination rate.’’
Dunedin and the Southern region could be proud of what it had achieved, but should not be satisfied yet.
‘‘We may be among the top performers in the country, but there is more work to be done.’’
Mr Hodgson believed everyone would eventually gain immunity to the Delta strain of Covid-19 ‘‘one way or the other’’ — either through the vaccine or through having the disease.
‘‘Let’s please make it through the vaccine.’’
Comment now