Wall of Fame runs out of room 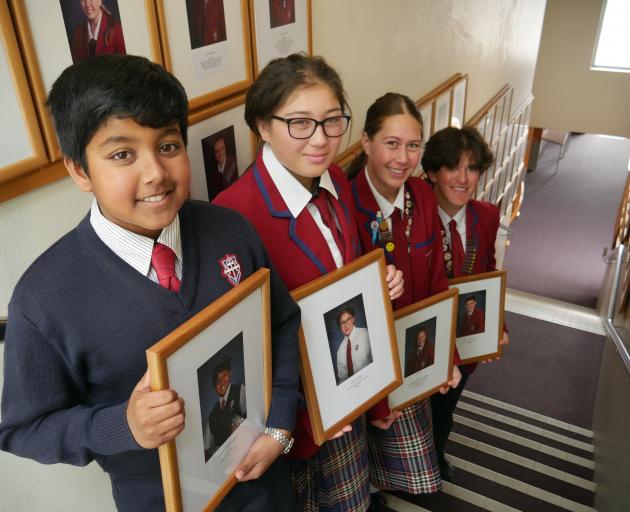 Kavanagh College high achievers (from left) Akein Wickramagedara (12), Serenity Hook (15), Ona Fraser (18) and Josh Forrester (16) hold their photos for the school's Wall of Fame. PHOTO: JESSICA WILSON
In a world which has been disrupted by a global pandemic, Kavanagh College pupils are still achieving at a national level.

Each year since about 1993 pupils who have achieved national honours have their photographs put on the school’s Wall of Fame.

This year space is running out, and the school has had to make some room.

The Wall of Fame starts in the auditorium foyer and continues along the wall and up beside the stairs.

School principal Kate Nicholson said 10 pupils were inducted on to the wall this year, which was a significant amount given the disruption caused by Covid-19.

Assistant principal Katrina Kerr-Bell said eight to 10 pupils were put on the wall each year.

"The strength of it is that it’s sport, culture, academic," Mrs Kerr-Bell said.

"There’s students who are excelling in their passion."

For many, being on the Wall of Fame was something they worked towards.

"It’s another incentive to help them [reach] their goals."

Often, former pupils returned to the school and were delighted to see their photograph was still up, she said.

Pupil Josh Forrester said it was awesome to know evidence of his achievement would be on the wall in years to come.

He knew some of the other pupils on the wall and wanted to be up there with them, he said.

Josh was named in the junior Black Sox squad to compete in the 2022 World Cup.

Making the squad was a goal of his and he would attend training camps before the team was finalised.

She has been playing the trumpet for about seven years.

Pupil Ona Fraser, a hip-hop dancer, received the highest mark in Australasia for her level in a dance exam.