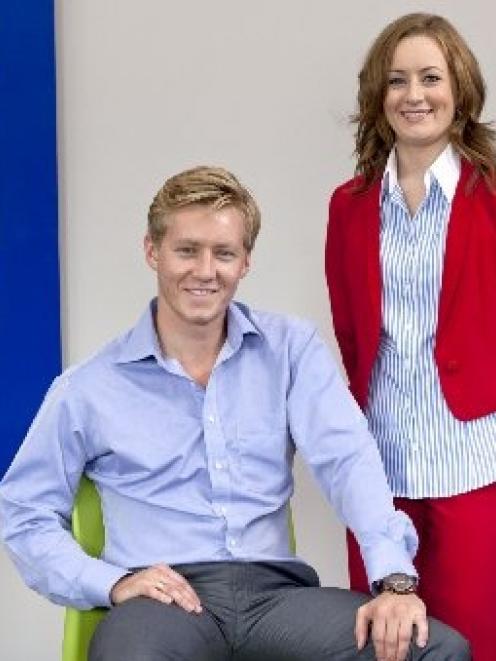 Carl (22) and Amber (25) McNulty operate their New Zealand-wide business from Cromwell. Photo supplied.
Cromwell siblings Carl and Amber McNulty are living their dream of staying in the place they love while doing business throughout New Zealand.

The McNultys recently launched their new job-matching tool Snaffle which they say will revolutionise the way employers find suitable candidates for vacant positions.

On both sides of their family, Carl and Amber McNulty are the sixth generation to live in Central Otago.

Mr McNulty said the idea had been some years in the making and eventually his stepfather Gavin Spencer, of Spencer Engineering, told him to ''just get on with it''. So he did.

Similar to a dating site, the job-matching technology allows employers to be find a list of qualified candidates with job skills matching the exact job title they needed in a specific industry.

The idea came to him after he left Dunstan High School and spent a gap year working for Mr Spencer in his Alexandra workshop.

''In four or five months, he had been trying to fill one position. He advertised widely using traditional methods. Five people came in and went out again.

''My step-dad said it really shouldn't be this hard to find someone. He wished it was the other way around.''

Mr McNulty said he thought about the problem for about six months and decided there was no reason why employers could not find the exact people they wanted to interview.

He then set about working on the problem while studying at the University of Otago. There was too much risk for employers ''stumbling across'' the right person for the job.

''I spent 18 months sitting on the idea, looking at models that worked well, ones that had problems and looking around the world at main employment models. I came back to what worked well and decided it needed to be done.''

The push from his stepfather was just what he needed and Mr McNulty started to work on the project, checking its feasibility as he went.

The snafflejobs.co.nz site was launched in March last year and has grown organically since then. Carl and Amber McNulty have funded the company's growth themselves and Mr McNulty said it was a viable business model.

At the start, six or seven Cromwell people were used to contact around 3500 New Zealand businesses about their recruitment needs and issues they faced with employment.

''Employers are tired of the laborious process after staff resign, currently requiring them to advertise for replacements, to get potentially an excess of unsuitable applications they have to wade through. Often, by the time they've interviewed people and made a decision, the original person has gone.''

The ''grunt work'' was being undertaken by 15 people employed by Snaffle living and working from around the Cromwell area. Some professional services had been contracted out to Auckland companies.

The grunt work consisted of project management and a research team sorting out the ideas into something that could work, Mr McNulty said.

''We take an idea and pull it to pieces until we know what the end result should be. We can't build that, so we send it off to Auckland to have it built.''

''It can be done from here [Cromwell]. There is no reason why we can't. After all, home is where the heart is.''

Asked whether there was enough broadband capacity from Cromwell for the business to operate smoothly, Mr McNulty said although the rural fibre network was coming to Central Otago, Snaffle had paid a premium to ensure it had what it needed.

''The infrastructure is available. We just paid more for it.''