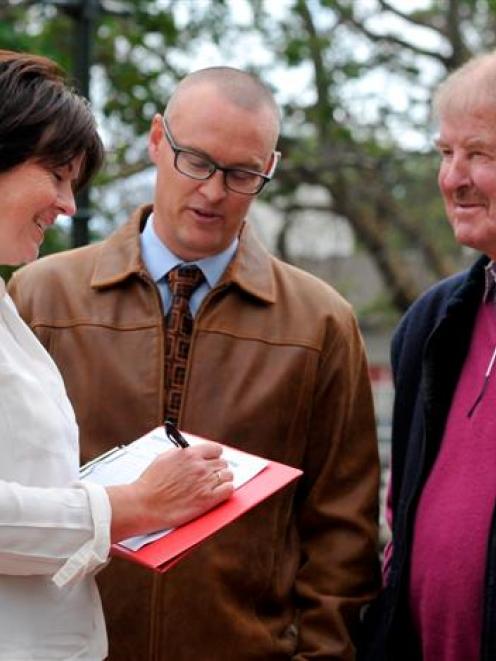 Meanwhile, Science and Innovation Minister Steven Joyce hit out at Labour for being ''constantly negative about the Dunedin economy'' and for attempting to politicise AgResearch's decision to shift about 75 jobs from Invermay.

The petition was launched in the Octagon yesterday, the first to sign it being the new Otago Chamber of Commerce chairwoman, Ali Copeman. Mr Clark said he hoped the petition to Parliament would force Mr Joyce and the Government to listen to the concerns of people in Otago and Southland.

''Steven Joyce hasn't listened to the appeals to save Invermay. He indicated that he is seeking more feedback, but has received several detailed reports showing the flaws in the proposed restructure.

He and others would be seeking signatures at Thieves Alley Market day on Saturday and the petition would also be taken around the region and to Waimumu Southern Field Days, Dr Clark said.

Former Invermay director Dr Jock Allison, who was present for the launch, said it was ''not too late'' to get the decision overturned.

The petition was ''part of the puzzle'' in the fight against AgResearch's decision, he said.

Commenting on the launch of the petition, Mr Joyce said Mr Clark and Labour's ''constant'' attempts to politicise the issue were ''disappointing''.

''As I've said repeatedly, I am thoroughly testing the AgResearch proposal with the board of directors.

''However, ultimately it's a decision for the board.''

Labour needed to ''stop being constantly negative about the Dunedin economy'', he said.

''In the latest household labour force survey released today, the unemployment figure for Otago is 4.4%, the third-lowest in the country,'' he said.