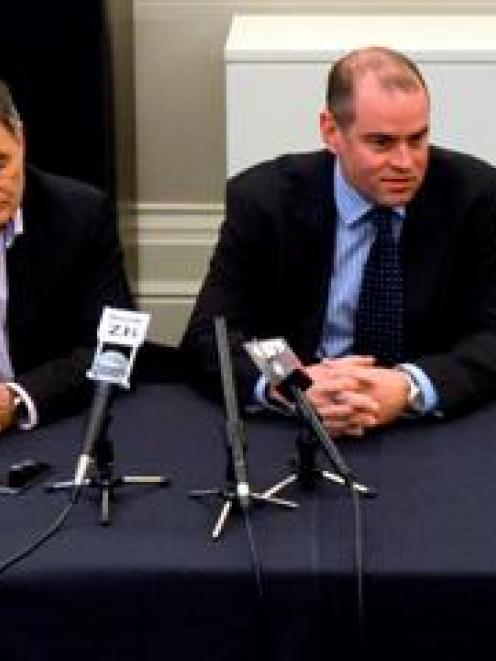 AgResearch acting chief executive Andrew McSweeney (right) and Dunedin Mayor Dave Cull respond to questions at a press conference after taking part in a meeting in Dunedin yesterday. Photo by Gerard O'Brien.
Those fighting to save jobs at Invermay believe their efforts are causing some on the AgResearch board to doubt the wisdom of the restructuring plan.

This comes after the delegation, made up of representatives from local government, the University of Otago and the private farming sector, made their case yesterday to senior AgResearch management and board members.

Otago Regional Council chairman Stephen Woodhead and former Dunedin North MP Pete Hodgson both said after the meeting they felt members of the board were beginning to question some of the arguments behind cutting about 80 jobs from Invermay and shifting them to its Lincoln campus.

''I was left with a view that some members of the AgResearch team were starting to doubt the wisdom of their ways,'' Mr Hodgson said.

''By and large, I felt that the board members felt that there was some cause for pause ... whereas the senior executive team seem to be a bit more weathered to their proposal as originally announced.''

This raised hopes for the fight to save jobs at Invermay, as the board was ultimately responsible for making the decision.

The pair felt yesterday's meeting was positive, but were disappointed AgResearch, despite being repeatedly questioned on the issue, would not say when a ''final decision'' would be made. Without a timeline, AgResearch risked losing some of its best staff.

''The big risk for us is that AgResearch allows the days and months to drift by and in the meantime ... the best and brightest shoot through, because they are the most employable.''

Mr Woodhead said the case the Southern delegation put to AgResearch was ''comprehensive''.

''I did hear [AgResearch chairman] Sam Robinson say they would be having a fresh look and getting back to us.''

''What that actually means, I am not too sure.''

He noted some board members looked ''quite uncomfortable'' during the delegation's presentation.

Collaboration by the regional council with AgResearch on research related to Otago environmental concerns was also discussed at the meeting.

Speaking at a press conference after the meeting, Dunedin Mayor Dave Cull said it was pleasing to finally get an opportunity to make a case.

''We are very grateful for some of the members of the board and the executive team coming down and hearing us.''

Much of the delegation's case rested on the ''virtual hub'' that existed in Dunedin around genetics.

AgResearch acting chief executive Andrew McSweeney said the meeting had been positive and further meetings had been arranged with the ORC, Environment Southland and Otago University.

''It's been a really good morning - we have listened to the Otago group. I think today's about listening, it's not about deciding.''

Deputy vice-chancellor, research and enterprise Prof Richard Blaikie said the university was pleased to have the chance for an ''ongoing dialogue'' with AgResearch.