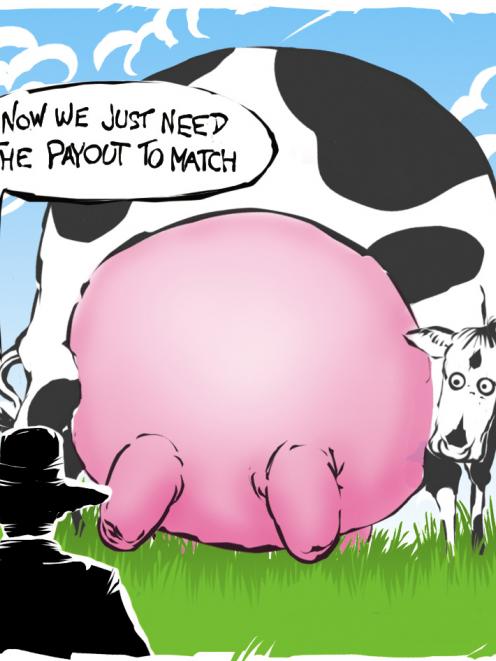 While recent firm payouts for milk solids production by Fonterra have been credited for the herd increase overall, it comes at a time when commodity prices are falling, global supply is building and analysts are picking a lean 2012-13 season with payouts possibly down more than $1 per kg to around $5.50.

National Bank chief economist Cameron Bagrie does not agree there is a "milk bubble" forming, but highlighted that when prices were high, it attracted more dairy production, which included the US "cranking up" its global supply.

"When there was a price surge, more people got on board with increased production, the correcting mechanics being the prices rolling over [in decline]."

The sector needed more stability and "gravity", as opposed to price surges, which lead to milk price payouts "falling crushingly", he said.

He predicted in the long term, dairying prices would have a strong trend but would not deliver an average of $7 or more per kg annually over the next five years.

The trend to dairying over sheep farming continues, with overall dairy cattle numbers nationally having increased by 259,000 to 6.17 million, while sheep declined from 32.5 million to 31.1 million, Statistics New Zealand data revealed yesterday in its agricultural production statistics for 2011.

Since 1990, New Zealand's dairy herd had grown from about 3.4 million to hit more than five million in 2002, since then making incremental annual gains to broach six million in 2011.

Agricultural Statistics manager Hamish Hill said the dairying increase in cow numbers was due to higher payouts for milk solids.

Of the South Island's increase to 757,000 dairy cows, 95% was driven by Otago, Canterbury and Southland. The South now makes up 31% of the country's entire dairy herd.

"The North Island regions tend to be mature dairy farming areas and so have small annual [herd] increases.

"It is in the South Island regions that we are seeing the big increases, particularly in Canterbury," Mr Hill said in a statement.

The decline in sheep numbers in the South Island was mainly in Otago and Southland, which were hit hard by snow and storms during lambing in 2010, delivering respectively 500,000 and one million fewer lambs per province.