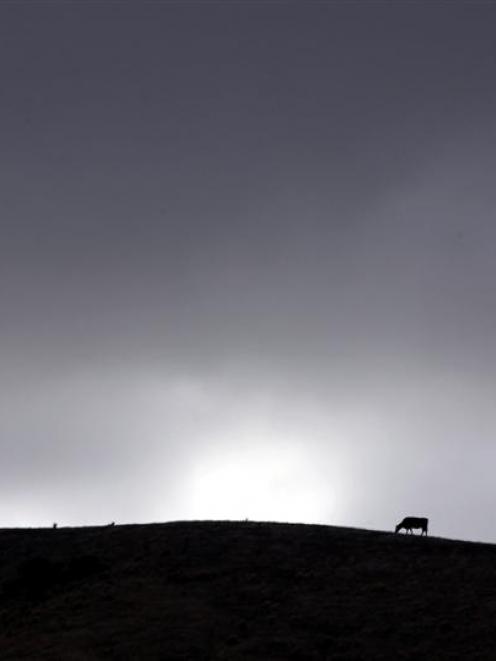 Photo by Reuters.
Dairy prices soared to record levels in this week's GlobalDairyTrade auction as drought hits local milk production, and it is predicted total production could drop for the first time in five years.

Prices rose 14.8% on a trade-weighted basis, the increase taking prices to their highest level in the auction's five-year history.

Rising prices had the potential to reduce, but not eliminate, the negative impact of the drought on GDP, Westpac economist Nathan Penny said.

The drought in the North Island was slowing milk production rapidly and, while it had rained in recent days, it was not enough to break the drought.

Westpac predicted production for the 2012-13 season could be as much as 2% lower than last year's total despite larger herd sizes and a bumper spring.

''As recently as last month we were still expecting total production to be slightly up on last year, but since then the drought has pushed milk production levels off a cliff.

''Our best-case scenario is now for this season's production to equal last year. However, it could be as much as 2% lower - it all depends on when the rains come,'' Mr Penny said.

Westpac agribusiness head David Jones warned the full financial effects of the drought might still be several months away and he urged farmers to keep channels of communication open.

Farmers had reacted swiftly to the drought, shedding stock and otherwise reshaping their operations, and many were still in a ''fairly strong'' cash position.

However, with killing chains now at full capacity, uncertainty over feed supplies and a likely shortage of replacement stock, many of their issues were still ahead of them, he said.

The global dairy market tightened considerably in mid-March and looked set to remain tight through the next six months, mainly because of supply contraction and Chinese buying, the latest Rabobank dairy report said.

With milk prices too low to justify supplementary feed purchases for many in the drought-stricken North Island, and with an eye to maintaining cow condition for the 2013-14 season, many cows were being dried off early.

''While the herd is not expected to see a disproportionate reduction by season's end, cull cows are being trimmed early as farmers look to maximise the use of scarce feed heading into autumn,'' she said.

The national cow slaughter was up almost 40% (45,000 head) in the four months to January, compared with the previous corresponding period.

South Island production had held up better because of better weather, irrigation support (in Canterbury) and the underpinning contribution of production from recent farm conversions.

Despite the difficult end to the current season, the dairy industry should start the 2013-14 season in ''decent shape'', Ms Moynihan said.