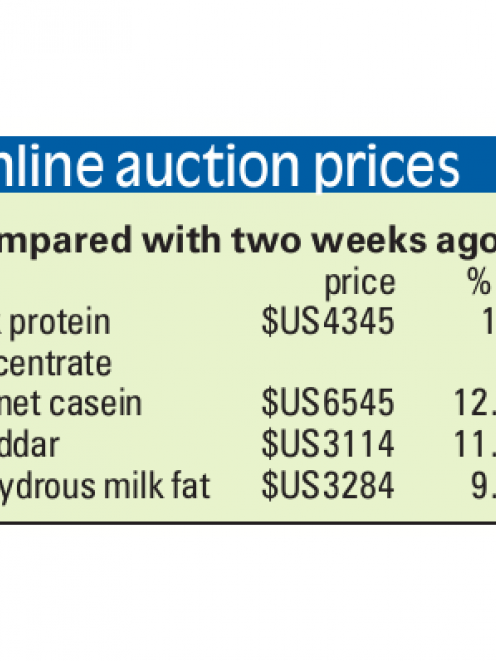 Prices of dairy products on Fonterra's overnight online auction dropped 4.5% this week - the biggest decrease since July last year - indicating why the dairy co-operative last week lowered its forecast payout for the 2011-12 season.

There had been a gentle decline in the auctions over the past couple of months, during which there was very strong milk production in New Zealand and in some offshore markets.

That would probably start to abate, at least in New Zealand, after the main hump of the production season and dairy prices were not expected to weaken substantially further, ASB chief economist Nick Tuffley said when contacted.

The key thing for dairy prices was currency and the bank expected the NZD/USD would remain "pretty high" over the next year.

Overall for the next year, Mr Tuffley expected the New Zealand dollar price paid for dairy products to be a bit weaker than over the last season but still "quite respectable". Prices had been "pretty resilient" over the past few months, he said.

ANZ rural economist Con Williams said there was a lot of talk in the marketplace on China's economy "slowing from a gallop to a canter" but he believed that had probably been overplayed.

Most import statistics for dairy products had been pretty strong.

The online auction was the first since Fonterra reduced its payout forecast for the 2011-12 season by 15c, citing the strength in the New Zealand dollar, higher global milk production and uncertainties in international markets.

The revision to a farm-gate milk price of $6.35kg ms remained "highly profitable" for most farmers and was unlikely to significantly affect supply over the rest of the season, Rabobank's latest dairy quarterly said.

Commodity prices, in New Zealand dollar terms, were now trading about 35% below their levels this time last year for whole milk powder, with cheese down about 15%.

Rabobank expected milk supply to be up 4% for the first half of 2012, generating solid export growth. Production had continued to outstrip prior-year levels, buoyed by exceptional growth conditions, farm expansions and high prices.

Exports had been strong, with January shipments 26.5% higher than a year ago. Powder sales to China had been strong in recent months, although volumes to Russia were down, and whole milk powder continued to dominate growth.

In early 2012, the gradual softening of international dairy prices extended to almost a year.

Export markets held up better, with China buying significant quantities after a six-month layoff, and strong support from Southeast Asia, the Middle East, Mexico and North Africa. However, increased international buying was insufficient to soak up the surplus.

Prices for butter, milk powders and whey were all down in the most recent price report from the US Department of Agriculture, Prof William Bailey, of Western Illinois University, said in this week's ASB Commodities Weekly.

European butter prices were at their lowest since late 2009. January export figures from the US showed exports were down 27% for butter, 1% for non-fat dry milk and 11% for whey, whey protein concentrate and lactose. The exception was cheese, up 3%.