They are among the characters that feature in games conjured up by Dunedin game development studios which have secured nearly $200,000 in funding from the New Zealand Centre of Digital Excellence (CODE) as part of its second round of funding.

The five successful recipients all came under the KickStart funding stream, which welcomed applications from developers with existing skills to create functional prototype games with the aim of raising further funding in 2022 for production and release. 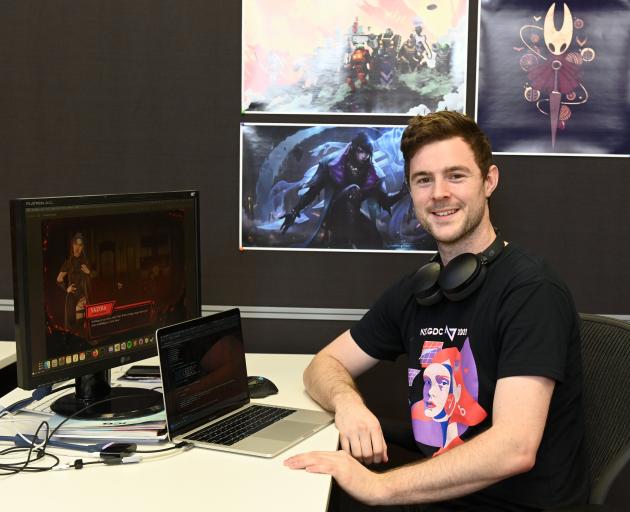 Josiah Hunt is thrilled to have received funding for an action-role playing game that he has been developing. PHOTO: LINDA ROBERTSON
Josiah Hunt, who leads Hyporeal Ltd, which received $40,000 for the development of Blackheart, a 2-D action-role playing game set in a dark fantasy world where the player was thrust into a world of a feuding royal family, was ‘‘over the moon’’.

Last year, he applied for funding in another round of grants but was ‘‘a bit overambitious’’ and did not get it. Since then, he had ‘‘refined everything’’ and worked hard on his pitch.

The concept started in Mr Hunt’s last year of secondary school, where he enjoyed reading fantasy books and liked the darker side of it. Blackheart was based in a fantasy universe he created while self-publishing two novels during school and university.

He enjoyed a stint at Dunedin game studio Runaway but had an ‘‘itch’’ he needed to scratch, which was to go it alone. He started working part-time on Blackheart while also doing web development.

The CODE funding meant he would be working on his project full-time for the next five months, while the rest of his team would work part-time. Before that period finished, he would be looking to put together some publisher packages and approaching publishers, he said.

He was working in shared office space Petridish, where he was motivated and inspired by his counterparts who were doing ‘‘all kinds of cool stuff’’.

Dunedin Mayor Aaron Hawkins said the latest round of funding meant CODE had now funded a dozen Dunedin game development studios and it was another tangible step towards building a ‘‘thriving and nationally significant industry’’ in the city.

‘‘The breadth and ingenuity of ideas coming from our local game developer community has been nothing short of inspiring,’’ Mr Hawkins said in a statement.

There were 24 expressions of interest received in the second round, resulting in 15 full applications. There had also been strong interest in the Scale Up funding category which targeted larger existing studios and further announcements were expected to be made soon.

The other recipients were. —