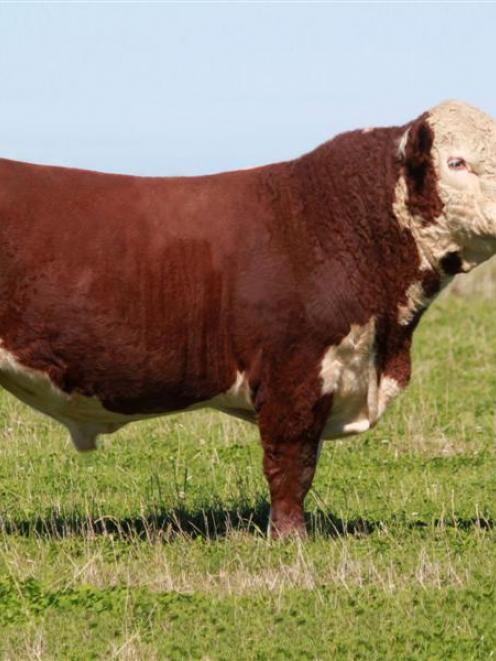 Waikaka Skytower 1289 was bought by Peter Reeves, from Mokairau Station at Gisborne - the third-highest-priced Hereford bull at the sale.

The Paterson family, from Waikaka Station, have been breeding Herefords since 1954 and it was the highest price they have achieved.

While Laurie Paterson knew it was a good bull, he said you never knew what the mood of the sale was going to be.

However, it proved to be a strong sale for the Herefords, with the overall top-priced bull at the sale, Okahu Sonny Bill, offered by Kelly O'Neill, of the Okahu Trust, near Raetihi, selling for $40,000.

Okahu Sonny Bill, who also won the PGG Wrightson champion of champions title, was bought by the Robbie family, of Otapawa Herefords at Tiraumea.

Mr Paterson believed Waikaka Skytower had a bit more bone, thickness and outlook than a lot of other bulls at the sale.

He was very sound and had a ''perfect'' set of estimated breeding values (EBVs) across 16 traits.

Mr Paterson was confident the bull, which the Patersons had already used, would breed well and he was looking forward to seeing his progeny.

The bull was sired by Monymusk Eiffel Tower, whom the Patersons bought from Chris and Jayne Douglas, of Te Anau, at the national sale in 2011 for $12,000.

They had already retained another son by Monymusk Eiffel Tower - Waikaka Skytower 1210, who won supreme champion Hereford, along with the Junior Meat and Wool Cup, at the Canterbury A&P Show last year.

Mr Paterson liked Herefords because of their temperament and ability to finish early.

''They're like an all-rounder, really, good right across the board,'' he said.

Other southern Hereford breeders also did well at the sale, with Duncraigen Farm (Wyndham) and the Kane family (West Otago) both selling bulls for $10,000.

A Simmental heifer from Glenside Simmentals, at Waitahuna, was second in the Queen of Hearts all-breeds heifer calf show and went on to top the sale, purchased by Everd and Marie Strauss, from North Taieri, for $5000.