Fonterra sets out to reassure markets 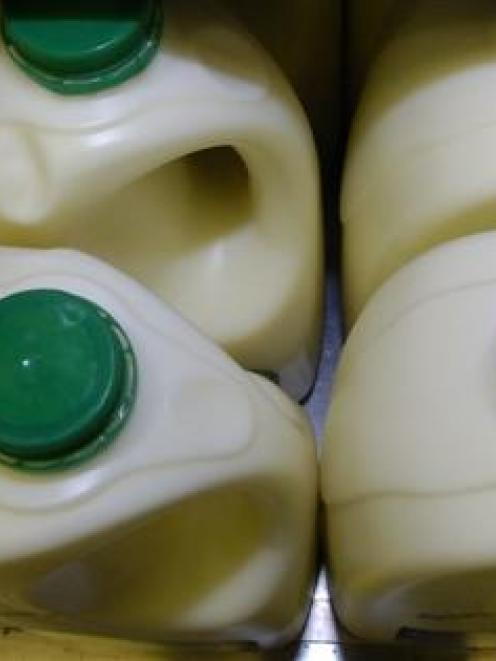 Dairy co-operative Fonterra says it is providing assurances about the safety of its products. Photo by ODT.
Fonterra has moved to persuade global customers that New Zealand dairy products are safe to consume, in the wake of the discovery of dicyandiamide residue in milk.

Chief executive Theo Spierings said the ''bottom line'' was that its products were safe and customers could ''rest assured'' that was the case.

Fonterra Shareholders Fund units took a small, immediate knock as trading opened on the NZX yesterday after a weekend in which international media latched on to the news that small traces of a nitrate inhibitor had been found.

Mr Spierings said Fonterra's testing found only minute traces of DCD in samples of some of its products and they were about 100 times lower than acceptable levels under European food safety limits.

The Ministry of Primary Industries had confirmed the traces posed no risk to human health, Mr Spierings said.

''DCD has never at any point been a food safety issue, and if it had been, we would have been the first to speak out.

''Fonterra has one of the highest standard food supply chains in the world,'' he said.

''We know some of our customers and regulators have questions. We need to answer them, and that's exactly what we are doing.

''We have strong science and we are providing assurances about the safety of our products,'' Mr Spierings said.

Fonterra had been involved in a working group with the Government, fertiliser companies, scientists and other dairy industry representatives gathering information, scientific opinion, and undertaking tests since November.

''Residues of DCD nitrification inhibitors were detected but the levels recorded were in the order of parts per million.

''These residues only came to light because New Zealand continually tests for and refines testing for impurities,'' Dr Rolleston said.

''I doubt many countries test to the level we do but once DCD was verified, our consumers and trading partners were notified.

''We take this seriously ... and any suggestion otherwise is scurrilous."

He said the industry was not hiding from genuinely informed criticism but uninformed speculation and innuendo was irresponsible.

DCD was a nitrification inhibitor used by the dairy industry to reduce nitrate leaching into waterways and greenhouse gas emissions.

Research at Massey University showed dairy farms could produce milk sustainably and economically and meet the strictest council guidelines for run-off of nitrogen, without using nitrification inhibitors, he said.

Labour primary industries spokesman Damien O'Connor questioned why the issue was not disclosed in September, which was when he said Fonterra discovered traces of DCD.

Mr Spierings later rubbished Mr O'Connor's claim that it was hushed up to allow the Fonterra Shareholder Fund float to occur unimpeded in November.

Green Party agriculture spokesman Steffan Browning said New Zealand's 100% pure marketing advantage was crucially important to its farmers ''and we should be protecting it, not asking the rest of the world to expect less than 100%''. - Additional reporting BusinessDesk