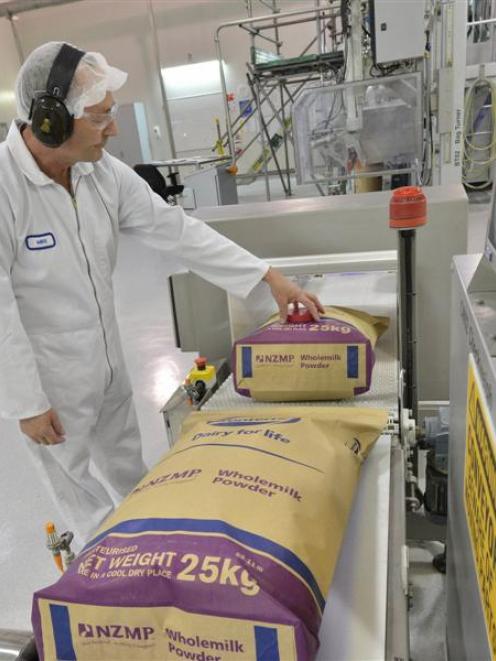 Fonterra units start trading on Friday. Photo by Sally Rae.
Fonterra units have been valued at the top of the range at $5.50 each but demand is expected to push them up even further when trading begins on the NZX on Friday.

The size of the fund ensures it moves straight into the NZX-50, being larger than the market capitalisation of Hallenstein Glasson and smaller than Freightways.

As a result of the strong interest in the Fonterra units, the so-called fund will launch at a size of $525 million. There is expected to be a mixture of farmers selling into the fund with Fonterra making up the difference in units but the split was not revealed yesterday.

It appeared that Fonterra had provided all of the 95.5 million shares into the fund, on figures supplied in the media release.

The range provided in the prospectus was between $4.50 and $5.50. Yesterday, Fonterra would have issued new shares at $4.52.

In a move bound to cause angst among some New Zealanders, 42% of the fund, or $220 million, was sold to institutions based offshore.

The remaining 58% of units were allocated to New Zealand retail and institutional investors, as well as "Friends of Fonterra", which include Bonlac Supply Co.

The Otago Daily Times understands sharebrokers had their orders drastically scaled back, with some receiving less than 20% of their orders. That could see the price of the units pushed up even further on Friday.

Potential investors had paid their money before the allocation so were allocated $10,000 of shares rather than 10,000 shares.

Existing dairy farmers with 100% of their shares intact saw their value rise by $1 a share yesterday. For example, a farmer with 250,000kg of milk solids and 250,000 shares gained an extra $250,000 in capital value. That will, theoretically, lower their indebtedness to banks.

Chief executive Theo Spierings said investors recognised there was some complexity in the structure of Trading Among Farmers (Taf), but there was strong acknowledgement of Fonterra's leading position and clear growth strategy.

More than 2500 members of the "Fonterra family", as well as around 7000 retail and institutional investors had taken the opportunity to gain exposure to the dairy sector.

"With an initial fund size of $525 million, we have been able to ensure that those eligible under the Friends of Fonterra and Bonlac Supply Co categories will receive their requested amounts."

The majority of units were held by New Zealanders.