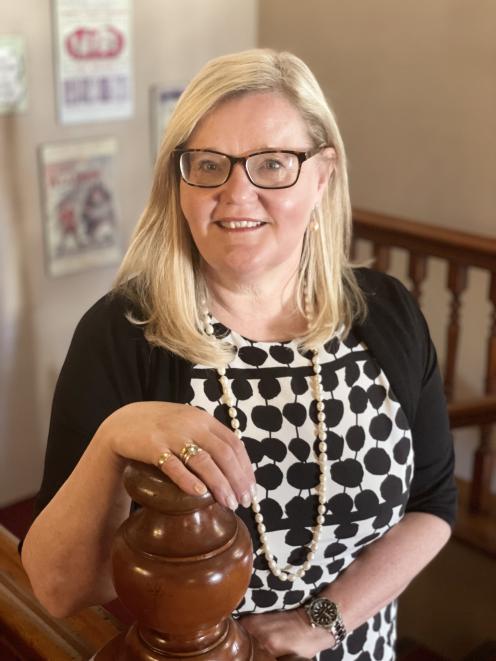 Susie Staley has carved a successful career in both law and governance. PHOTO: AMIE RICHARDSON
Dunedin lawyer Susie Staley has an extensive governance CV, her latest appointment being  to chair the Broadcasting Standards Authority Board. She talks to business editor Sally Rae.

When she commits to something, she is in boots and all — there are no half measures — whether with her successful legal career in Dunedin or the diverse governance roles that run alongside.

Ms Staley, who established Staley Cardoza Lawyers with Rachel Cardoza in 1998, the first female legal partnership in Otago, has an extensive governance CV.

Her services to governance were recognised in 2014 when she was made a member of the New Zealand Order of Merit, the citation saying she was considered a role model for women on boards.

Earlier this month, Ms Staley was appointed chairwoman of the board of the Broadcasting Standards Authority (BSA), the independent Crown entity that oversees and promotes broadcasting standards on behalf of New Zealanders.

She joined the board in 2018 and replaces Judge Bill Hastings, the former chief censor who has taken up the role of Kiribati Chief Justice, as its leader.

While it was clearly known as a regulator, it was a dual role given it was a Crown entity having the usual governance role that entailed, Ms Staley said.

Working for a regulator was not new to Ms Staley, who was chairwoman of Maritime New Zealand from December 2002 until January 2010.

During that period, the entity took on additional roles, such as responsibility for the Rescue Co-ordination Centre for New Zealand, which followed the Time Out boating tragedy off the coast of North Otago.

The appeal of the BSA stemmed from a personal fascination with news — "I’m really interested in news" — coupled with her knowledge of being a regulator.

"What the BSA does is quite fascinating. It’s become even more fascinating under Covid," she said.

But it was also quite difficult to grapple with an old piece of legislation, the Broadcasting Act 1989, which came into being when the internet was "just in play".

Earlier this year, the BSA welcomed the announcement of a review of New Zealand’s media content, Judge Hastings saying the authority had long been supportive of changes given the different ways audiences consumed content and the ongoing shifts in the media sector.

Ms Staley said research showed preschool and young school children did not watch television, they watched YouTube, which the BSA did not regulate — so its "sphere of influence" was getting smaller.

Misinformation was a "huge issue" and having reliable news sources, whether in broadcasting or other media, was very important.

"Otherwise where do people get information from?"

Ms Staley believed New Zealand media had been "really respectful and responsible" in their coverage of the Christchurch mosque shootings tragedy.

The BSA upheld one complaint after finding the use of extensive excerpts from the attacker’s livestream video on Sky News New Zealand "had the potential to cause significant distress to audiences in New Zealand and particularly to the family and friends of victims and the wider Muslim community".

The remaining three complaints related to coverage by 1 News, which featured a very brief excerpt from the livestream video and footage of identifiable victims, some with visible injuries, as they were being taken into hospital.

Taking into account the unprecedented circumstances and the high level of public interest in the coverage, the BSA did not uphold those complaints.

In making those decisions, the authority acknowledged the traumatic events of March 15, 2019, and the impact they had on New Zealanders, particularly on the family and friends of victims and the wider Muslim community.

The authority also acknowledged the critical role media played in reporting during crisis events and the unprecedented circumstances facing New Zealand broadcasters at this time.

When it came to complaints, Ms Staley said key performance indicators could not always be about the number of them, but needed to account for how complex they were. She cited the complaint about current affairs television show Sunday’s investigation into the way the University of Otago reacted to sexual assault and rape allegations by current and former students.

That complaint — which was rejected, although coverage afterwards by TVNZ’s Breakfast and 1 News were ruled unfair — was very complex, while some complaints "aren’t as much".

Ms Staley is also chairwoman of the boards Save the Children New Zealand, Chatsford Management and Police Health Plan Ltd.

WHEN she finished as long-serving chairwoman of iD Dunedin Fashion Week — she was a driving force behind the event and helped it grow from a small one-off event to an international week of fashion events — she had a little more time on her hands.

She was keen to give back to charity and her mother had been quite a supporter of Save the Children. Shortly after joining the organisation’s board, Ms Staley was asked if she would be chairwoman.

Being on the board was voluntary and it was quite a complex governance structure.

It was part of the Save the Children family "all over the world" and it also had its own autonomy in New Zealand. It was "quite a joy" to be involved with it, she said.

The organisation had held its own "extremely well" on the fundraising side throughout the Covid-19 pandemic.

Money had also been raised to send food parcels to Fiji.

Children in the greatest need were in African and Asian countries. Covid-19 had probably set those on the poverty line back five to six years and all NGOs were in catch-up.

The organisation was not just for overseas children — it also wanted to do what it could to help those in the greatest need in New Zealand, she said.

Save the Children was much more visible than it used to be in New Zealand, and she wanted the organisation to be known as the one that was "the voice for children".

Education was what children wanted; Save the Children New Zealand established a school in a brothel town in Bangladesh where most of the women had been trafficked.

One of the former sex workers was brought out for Save the Children New Zealand’s 70th anniversary; she was now a teacher’s assistant at the school and her daughter wanted to be a doctor.

An education hub was being created with free online resources for schools — initially for primary schools and resources would be developed for secondary schools in coming months — about providing a child rights lens across the curriculum.

"In Susie, we have an exceptional chair who provides guidance, passion and vision that steers us in the work we do. She is an inspiring force, creative and innovative in her thinking, and receptive to new ideas of where we want to grow and build.

"She’s respectful of other people’s opinions, while managing meeting agendas to flow through on time seamlessly, like a magician. But above all that, she’s fun. So much fun.

"We’ve had some fantastic times travelling together to international meetings and she always brings an incredible energy to every event, leveraging each opportunity to get Save the Children New Zealand into the global conversations.

"We’re incredibly proud to have her as our board chair," she said.

Police Health Plan Ltd is a health insurance company — and likely to be life insurance — which provides healthcare for both sworn and non-sworn police staff.

The board, which is regulated by the Reserve Bank and also has some oversight from the Financial Markets Authority, had needed more independent directors. Again, Ms Staley was fairly rapidly asked to become chairwoman. She was the only woman on the board, although the company did have a female chief financial officer.

Locally, she is chairwoman of Chatsford Management, which is responsible for both the Chatsford retirement village and Birchleigh Residential Care Centre.

A major issue facing the health sector in New Zealand was qualified staff; the aged-care service was also struggling in that regard, and there was no easy fix.

With borders closed, foreign staff had not been able to come into New Zealand and, whether it was public or private hospitals, or aged care, everyone was in the same market for staff, she said.

The sector looked after some of the most vulnerable people and it had been "pretty hard" for those people during Covid-19. In particular, not being able to see family and visitors was very hard. Staff had provided a lot of support — "I think they are marvellous," she said.

Ms Staley believed everyone was tired and people were starting to get fatigued.

It was at times like this that there was the need to have people you could call on and who were prepared to do their jobs.

"We’re all in this together", whether management or boards, she said.

MANY of her board members were "quite feisty", which she wanted them to be — they were there to do a job, challenge and think.

They were there to do a serious job, although she also tried to "have a bit of fun".

Over the past two years, people had been busy working out how to do things a different way — "you have to learn fairly smartly".

As a board chairwoman during Covid-19, with restrictions on travel, it was harder to interact with people through the likes of Zoom and to get spontaneous reactions, she said.

Ms Staley’s governance career now spans more than 20 years. Asked what changes had occurred since she began, she said there was much more acknowledgement of and requirement for diversity.

Diversity of thought which could only come "if not everyone looks like me".

There was also recognition of age diversity, and climate change was an issue that should be exercising boards’ brains, she said.

Technology had supposedly made things easier but the speed at which people were required to do things had changed in the past five years — "and I’m not sure where that’s going to go".

A formal approach to appointments was much more rigorous than it used to be. When she looked around board tables, there were still often no women; there were a lot more women in senior management roles — "which there should be".

More flexible working arrangements and recognition that child care was a shared responsibility had also occurred. When her now 31-year-old son was born, there was no paid parental leave.

Ms Staley was grateful for the great team at Staley Cardoza; her governance career was "just part of what I do" and she was grateful to be in a position to still have work.

Even prior to Covid-19, she had believed people were seeking to change their lifestyles to reflect what was important to them and what they really wanted to do.

A keen traveller, Ms Staley was looking forward to "getting closer" to being able to travel again. Her "real dream" was to live in Italy and France for a few months.

In the meantime, she was looking forward to spending a few days at Lake Tekapo and then "hanging out" at her St Leonards home and gardening, hopefully coupled with enjoying good weather.