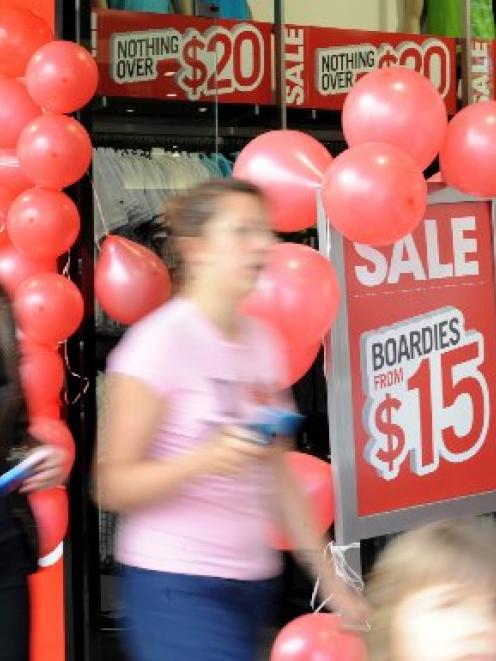 Shoppers on Dunedin's George St look for bargains on Boxing Day. Photo by Peter McIntosh.
Otago merchants fared better than most during Boxing Day retail activity as the national volume and value of electronic transactions were down respectively 6.7% and 2.8%.

Attracted by discounts of 50% or more, thousands of Boxing Day bargain hunters flocked to Dunedin's central business district, with numbers in general further boosted by cruise-ship passengers making the most of the fine, warm day.

Otago's overall volume for the day was reasonably static at about $5.5 million, down 0.4%.

Marlborough and Canterbury - with Christchurch having to close some CBD areas on Boxing Day because of earthquakes - were by far the hardest hit in value loss, with Marlborough down 11.1% to $1.3 million and Canterbury down 9.6% at 9.9 million.

All 17 regions reported a decline in transaction numbers while only two reported increased values; Auckland-Northland being up 0.4% to $40.8 million and South Canterbury up 0.6% at $1.6 million.

Otago Chamber of Commerce chief executive John Christie was "not surprised" by the overall downturn in transactions and values, saying consumers were still "uncertain" about the state of the economy, given the wide-ranging job losses announced recently around New Zealand.

"The number of redundancies before Christmas was a reminder that the economy remains very fragile," Mr Christie said when contacted.

A chamber survey of member confidence released in mid-December reflected the uncertainty, with many accepting there was no quick return of improvement, but most of those surveyed expected to see greater opportunities during the next three to six months.

The main points of the chamber survey revealed business confidence in the South had dropped during the three months to December 15, compared with the September quarter.

Mr Christie said while Dunedin was reported to have been busy on Boxing Day, there was a new consumer expectation of receiving gift vouchers for Christmas to spend on Boxing Day, gaining extra value through the seasonal price reductions.

The peak shopping hour was between noon and 1pm, with the Paymark network processing an average 129 transactions per second, equating to 435,000 transactions in total for the hour.

Paymark chief executive Simon Tong said at the time that by value, shoppers purchased $120 million in their final Christmas Eve gift-buying blitz up to 1pm and half of this total was processed between 10am and 1pm.

Spending appeared to be tracking similarly to the same day last year and on the day before Christmas Eve, a total of $226 million was spent across the country.

Otago spending for the month to December 21 was up 3.2% to $153 million, Paymark reported earlier.