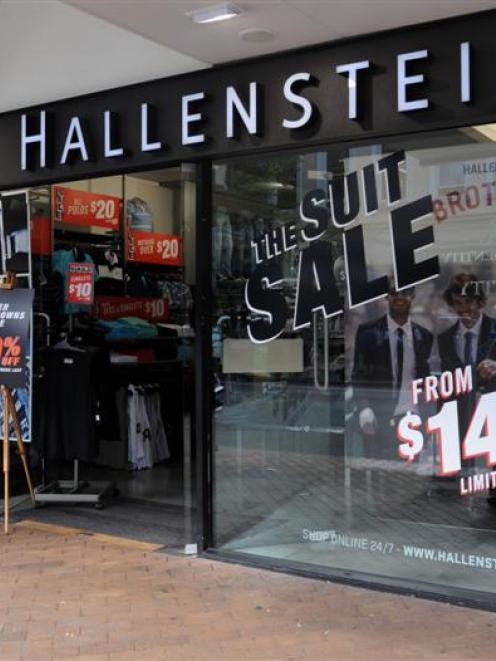 Differing trading updates but Hallenstein Glasson and The Warehouse face the same obstacles through discounting and internet sales. Photos by Peter McIntosh.
The changing dynamics of retailing and recession-led volatility have been reflected in a cautionary Warehouse profit downgrade and an expectant sales and profit boost for Hallenstein Glasson.

For both companies, and analysts at Craigs Investment Partners and Forsyth Barr, the key is profit margins which have been coming under increasing pressure, in part from internet competition. 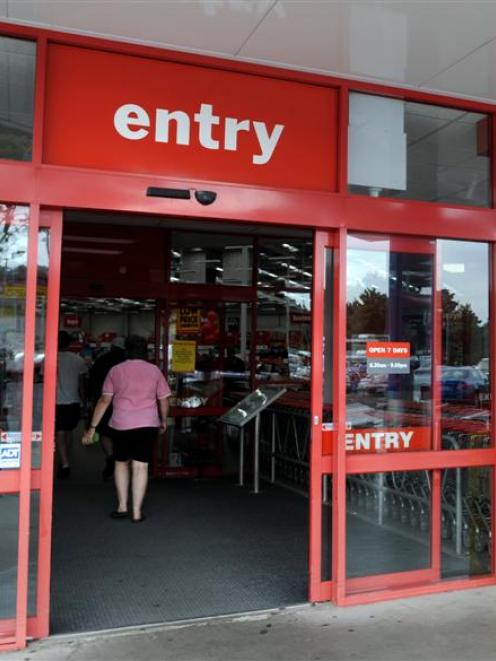 Paymark, which processes about 75% of electronic transactions, showed $4.6 billion was spent during December around the country; up 3.4% on a year earlier.

On Boxing Day, one of the most discounted annual shopping days, Otago and Southland booked the two highest value gains of more then 12% spending increases - respectively $6.2 million and $2.8 million. Auckland and Northland reported a 6.7% increase to $43.5 million.

While both retailers have positives in their respective updates, the rest of the year appears to hold cautions on trading performance.

Despite sales up more than than 4% for the quarter to January, the Warehouse last week cautioned in a trading update it had downgraded its after-tax profit expectations by between 6%-11%, from $70 million to a range of $62 million-$66 million, because of declining profit margins.

Forsyth Barr yesterday further downgraded its full-year 2012 forecast by 8%, estimating a mid-range $64.5 million after-tax profit, which is down 15% on last year's $76 million. The stock valuation fell 12c to $3.30, but the brokerage maintains a "hold" recommendation.

Conversely, Hallensteins issued a trading update yesterday, for the six-months to February 1, outlining an almost 8% increase of sales to $108.5 million and with guidance for after-tax profit for the period to increase about 25%, or up by an extra $9 million.

Craigs Investment Partners broker Peter McIntyre said while the Warehouse and Hallensteins were different product lines, their target demographics were similar and both catered for the lower end of the retail market in offering "reasonably priced" products.

Many retailers had reported sales growth, that had been achieved through discounting, which in turn affected profit margins, he said.

Retailers' respective use of the internet for sales, and the ongoing impact of internet competitors, meant retailers could expect changes for not two to three years, but for decades, he said.

"The dynamics of retailing are changing and all retailers can expect the impact of online trading to be felt for decades ahead.

"What is happening in New Zealand mirrors what is already going on in Australia," Mr McIntyre said.

"However, this came at the expense of margins in some categories, although this would have been partly due to the poor weather during early summer and over the holiday period. Apparel margins were cited as being particularly weak," she said.

That problem in apparel margins was also seen in Pumpkin Patch and Kathmandu recently.

In general, increasing internet competition was a factor of weakness in the retail sector stocks, but some chains were countering the competition better than others with their own internet sales, Ms Kinnaird said.

Mr McIntyre said with Foodstuffs and Woolworths each maintaining 10% shareholdings in the Warehouse, potentially as takeover blocking stakes, the low share price at present could again prompt more corporate activity.

Shareholders had already weathered "too much of a sustained loss", on the weakening share price and should consider all factors before selling.

Warehouse chief executive, Mark Powell, said last week that while pleased with overall sales growth, market conditions resulted in pressure "being brought to bear" on some margins, particularly in apparel.

Expectations of group after-tax profit of about $80 million remained in line with earlier guidance, he said.

Hallenstein's chief executive, Graeme Popplewell, said yesterday he anticipated it would be a difficult challenge to continue the earnings momentum during the rest of the financial year, noting the practice of annual rent increases in excess of inflation by major shopping centre owners meant specialty retail in some centres was a "marginal proposition", prompting a store portfolio review.

"A consumer conditioned to paying less than full price, rising rents, wages, and the increased cost of goods from China in particular will present us with some real obstacles to overcome moving forward," he said.

However, there had been strong progress in internet sales during the past six months and a firm focus would be maintained on its digital stores. .