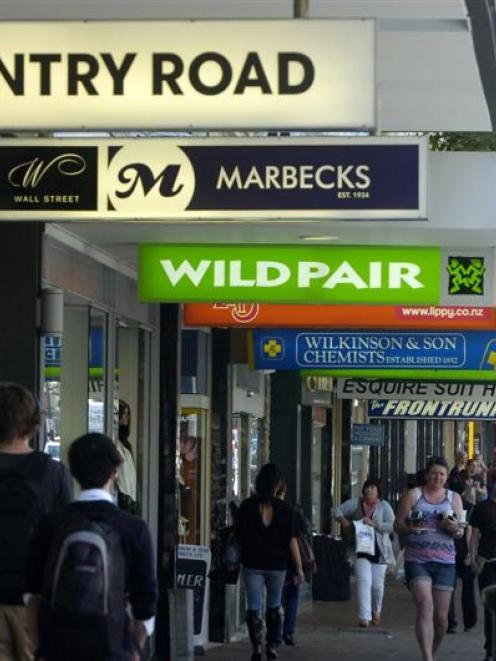 Post-Christmas pick up? Economists believe the retail sector will improve following a lean Christmas. Photo by Jane Dawber.
A slump in December quarter retail sales confirms retailers' impressions of a lean Christmas, but economists are still confident the economy has better times ahead.

Core retail sales, excluding vehicle-related industries, were flat in the last quarter of 2010, rising less than 0.1%.

ANZ Bank said in a statement the result pointed to an economy "at an inflection point".

The BNZ said while the data was poor, it was "not without silver linings".

BNZ's head of research, Stephen Toplis, said the weaknesses were in specific sectors and he still believed there was an underlying recovery.

Westpac chief economist Brendan O'Donovan said the result was as he expected and reflected consumers buying most of their big-ticket items in the September quarter, ahead of the GST rise.

"While lagging activity data for 2010 has been weak and reads on housing for January were not encouraging, activity gauges for 2011 and forward-looking indicators suggest that the New Zealand economy has regained momentum on a number of fronts."

The Canterbury earthquake would also have impacted negatively on the figures, but Mr O'Donovan said the data mostly reflected the stalled recovery in jobs and household income through the middle of last year.

"These factors are driving the cautiousness of households in regards to discretionary spending," Mr Tuffley said.

But an increase in January electronic card transactions pointed to a rebound from weak December card data, and was a sign retailing could be starting to improve this year.

"Today's data adds to the recent run of underwhelming data and there remains little urgency for the Reserve Bank to lift the official cash rate."

The earliest the bank was likely to move on the cash rate would be September, he said.

Supermarket and grocery stores had the largest sale movements, with the volume up 1.9% and value up 2.4%, but seasonally adjusted figures for December reveal retail sales value fell 1.1%, or $60 million, after a 1.2% fall for November.

Mr Tuffley said the recovery in vehicle sales had run out of steam, with the gains made in the September quarter cancelled out by the recent decline.

"The low levels of vehicle registrations over December and January call into question the sustainability of the recovery in vehicle sales," he said.

This was the last monthly release of retail data, with Statistics New Zealand changing over to quarterly releases.