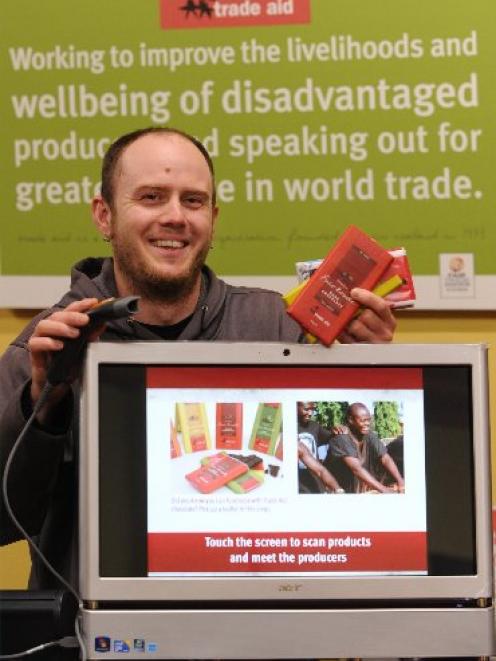 But University of Otago Department of Design research student Jason Taylor has made it possible, with a point-of-sale kiosk system he designed and built for Trade Aid Dunedin.

Since May, the fair trade retailer has had a model in its store which provides customers and staff with information about sources of the shop's goods at the touch of a button.

"There is quite a resurgence in people wanting to know where things have come from," Mr Taylor said.

The concept of supplying consumers with information at the point of sale was important, and tied perfectly with what Trade Aid did, he said.

He recently finished an updated version, with additional information and features, which was sent to the chain's flagship store in Wellington for a test period.

"The feedback that I've gotten back is that the new model held up really well and made it through the holiday rush with no failures," he said.

People enjoyed being able to interact with the touch-screen model.

It is hoped the kiosk will be launched in Trade Aid's 30 shops with more interactive features and staff functions, such as an ability to email and print information.

Trade Aid Dunedin assistant manager and education officer Dave Butler-Peck described the scanner as "fantastic", not only for customers but for staff and volunteers as a way to keep up to date with the shop's products and producers.

It was also like an unpaid employee because while idle it displayed educational messages about Trade Aid.

Mr Taylor's kiosk was one of many projects undertaken by university students on behalf of the shop.

The university design studies department established a relationship with the shop three years ago with senior lecturer Dr Mark McGuire putting together projects for his students.

"I think engaging students with community groups and organisations is really important for us," Dr McGuire said.