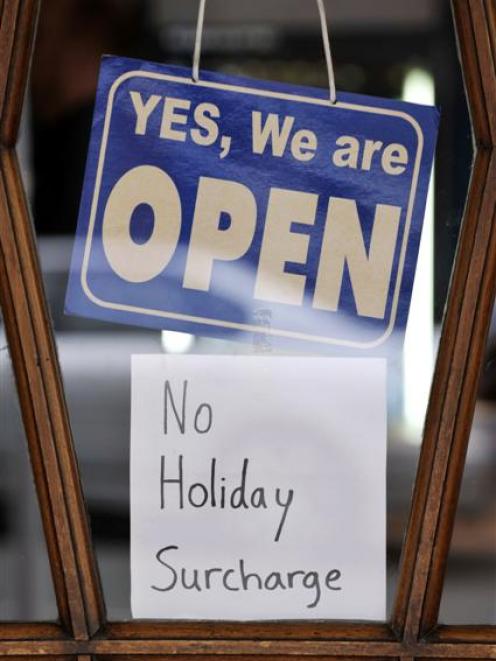 Dunedin cafe and restaurant signs yesterday. Photo by Gerard O'Brien.
The inconsistent application of the Holidays Act was evident in Dunedin yesterday, as Labour Day public holiday surcharges at cafes and restaurants ranged from 20% to nothing.

However, a calm, sunny day off work ensured patrons flocked to inner-city establishments, irrespective of penalty charges for food and drinks.

The most expensive surcharge was 20%, which was levied by Mash and Baraka in the Octagon.

The surcharge had not affected business, a Mash bar worker said.

Nova Cafe had a 15% surcharge.

However, most businesses elected not to impose the surcharge.

Ra Bar owner Beth O'Connor said she had decided not to charge extra this year.

"There was quite a reaction to it last year, so it's better spirited not to have it," she said during the lunchtime rush.

"If it's a busy day it's OK and we've been very busy today.

"They're nearly all visitors from out of town."

The Holidays Act requirements of time and a-half pay rates and a day off in lieu for working staff prompted many bars to stay closed, as well as more than half the cafes and restaurants in the inner city.

The most innovative promotion was run by the Craft Bar, which has given the business over to its staff for the past two Labour Days.

"If we're open and charge a surcharge, it's a negative on the business.

So the bar is run by the staff and, instead of getting an hourly rate, we all share in the profits," bar manager Shane Simpson said.

"If everyone's open it's not really worth it without the surcharge.

"But, if only a few places are open, like they are this year, then it is worth it."

The innovation, which was introduced last year by owner Barry Ellis, had proved popular with staff.

"Last year, we did really well.

"Everyone probably made a bit more than the time and a-half and day in lieu you'd normally get," duty manager Lydia Waddell said.