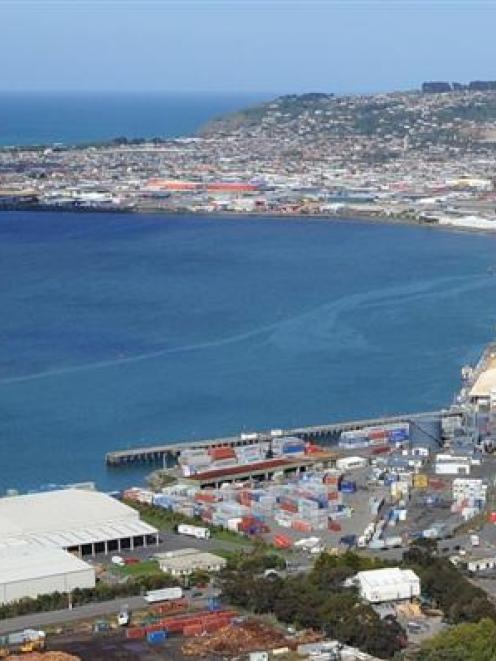 Port Otago's oil wharf (lower centre of photo) will have a 300m underground diesel pipeline link to the adjacent Leith wharf, at right, for fishing vessels. Photo by Stephen Jaquiery.
Port Otago has brought forward some of its capital expenditure programme this financial year, ordering two new container straddle carriers for $2.9 million, alongside a $1 million refurbishment of its oil wharf facilities in Dunedin's upper harbour.

Otago Regional Council-owned Port Otago has spent $90 million on capital expenditure during the past 10 years, including two Shanghai-manufactured cranes at about $10 million each, a $9 million tug, more than $14 million on refrigerated container outlets and maintenance, and $5.2 million on straddle carriers and empty container handlers late last year.

Port Otago had earlier estimated a capital expenditure of $2 million to $3 million this financial year, but chief executive Geoff Plunket said the purchase of two new Finnish-made Kalmar straddle cranes had been brought forward because of a higher handling rate of containers than previously estimated.

"Because of the higher container rate we decided to bring forward the purchase," Mr Plunket said.

Earlier this month Port Otago delivered a $9.7 million after tax profit, up 80% on the same period last year, but including a one-off $1.3 million boost by a property sale from subsidiary Chalmers Property and $4 million appreciation of investment property values.

The regional council received a $2.5 million dividend for the period.

Although there was a reduction in imports through Port Chalmers for the six months to December, overall container throughput rose 4% to 103,000 TEU (20ft equivalent containers) on the back of increased exports.

The two new Kalmars will boost total numbers to 16, but older carriers in the fleet were expected to be decommissioned later in the year, Mr Plunket said.

The new generation of Kalmars stand 14m tall, 3m higher than their predecessors still in use at the port, and can carry laden containers stacked more than three high, potentially boosting container storage capacity in some wharf areas by 25%.

Mr Plunket said depending on shipping space, the two new Kalmars were expected between August-October this year.

Two cranes delivered in January cost $3.2 million, but because of the recent New Zealand dollar strength against the euro, Port Otago had saved $300,000 through the foreign exchange transaction to get the latest pair for $2.9 million.

Mr Plunket said tenders were going out in about eight weeks for a $1 million 20-year refurbishment of the oil wharf in Dunedin's upper harbour, which includes a 300m diesel pipeline from the wharf to Leith wharf, underground, so fishing boats can be refuelled there, and not have to move to the oil wharf.

"There will be a new type of fender system put in place, catering for the larger ships which couldn't be used for the fishing boats," Mr Plunket said.

Included in the refurbishment would be strengthening of the wharf with extra piles and cross bracing, plus the pipeline and fender system.

Mr Plunket estimated the job would be undertaken and completed between July and December this year.