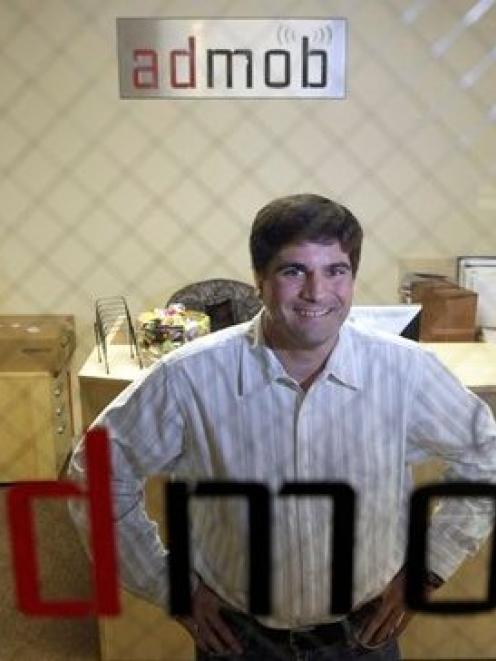 AdMob founder Omar Hamoui. Photo by AP.
Google thinks its increasingly bitter rival Apple is trying to muscle it out of the mobile advertising competition on the iPhone, iPad and iPod Touch.

The latest dispute between the Silicon Valley powerhouses centres on a proposed change that could hobble Google's ability to sell and place ads on devices running on Apple's latest mobile operating system, which comes out this month.

Omar Hamoui, the executive in charge of Google's newly acquired mobile ad service, AdMob, attacked Apple's new restrictions in a blog posting this week as a threat to competition.

He also warned the change would decrease the ad revenue flowing to the developers of iPhone and iPad applications, a scenario that could drive up the prices that consumers pay for the programs.

Google paid $750 million to buy AdMob, partly because of AdMob's success selling ads on the iPhone. AdMob, founded in 2006, was so good at it that Apple wanted to buy the company before being trumped by Google last fall.

Apple has since set up own ad service, iAd, fueling Google's suspicion that its rival wants to monopolise the commercial messages shown on the more than 50 million iPhones and iPads that have already been sold.

Under the terms of Apple's latest operating system for those devices, critical information for distributing and analyzing ads won't be shared with services owned by makers of other mobile operating systems.

That threatens to lock out AdMob, because Google's Android operating system competes with the iPhone.

That could be a major blow to AdMob, which distributed 30 percent of its ads to iPhones, iPads and iPods in April. Hamoui indicated he still hopes to persuade Apple to scrap the rule change.

On the flip side, Apple's restrictions could be an advantage for smaller, independent ad networks that would still have all the usual data needed to place ads on iPhones and iPads.

But that could turn out to be a handicap for mobile advertising services seeking to be bought by a larger company such as Microsoft that has its own mobile operating system.

It's unclear whether Apple will enforce the restrictions on how the ad data can be shared, said Noah Elkin, an analyst for eMarketer, a research firm.

"I think what we have here is two companies sparring for control of what is potentially a very big advertising market," Elkin said.

The US mobile ad market is expected to grow from about $US600 million this year to more than $US1.5 billion in 2013, according to eMarketer.

Both Google and Apple believe mobile devices eventually will supplant personal computers as the main way people surf the web. Their dueling ambitions to shape the direction of the mobile market have transformed the companies from allies to antagonists during the past year.

If Apple's new rules on mobile advertising data were to create a competitive barrier, it would likely attract the attention of antitrust regulators.

After a six-month review, the Federal Trade Commission approved Google's purchase of AdMob largely because the agency believe Apple's entrance into the mobile ad market would foster adequate competition.

In its approval of the AdMob deal, the FTC vowed to continue to monitor the mobile ad market for anticompetitive behaviour.