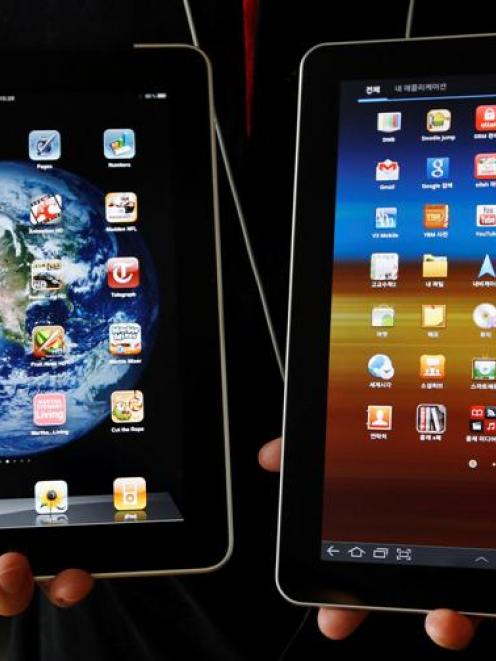 Samsung's Galaxy tablet 10.1, right, and Apple's iPad. REUTERS/Jo Yong-Hak/Files
Samsung Electronics defeated Apple in the latest spat in the rivals' patent wars when a British judge ruled Samsung's Galaxy tablets did not infringe the US company's designs for the iPad because they were "not as cool".

In Monday's High Court judgment Judge Colin Birss said that Samsung's Galaxy tablets belonged to the same family as the Apple design when viewed from the front, but the Samsung products were "very thin, almost insubstantial members of that family with unusual details on the back".

"They do not have the same understated and extreme simplicity which is possessed by the Apple design. They are not as cool," he said. "The overall impression produced is different."

The two companies are waging legal battles in about 10 countries, accusing each other of patent infringement as they vie for supremacy in the mobile device market.

Samsung welcomed the British High Court judgement, which it said affirmed its own intellectual property rights while respecting those of other companies.

"Should Apple continue to make excessive legal claims in other countries based on such generic designs, innovation in the industry could be harmed and consumer choice unduly limited," Samsung said in a statement.

Apple said it had no comment on the judgement, but it reiterated its view on the South Korean company's designs.

"It's no coincidence that Samsung's latest products look a lot like the iPhone and iPad, from the shape of the hardware to the user interface and even the packaging," the company said.

"This kind of blatant copying is wrong and, as we've said many times before, we need to protect Apple's intellectual properties when companies steal our ideas."