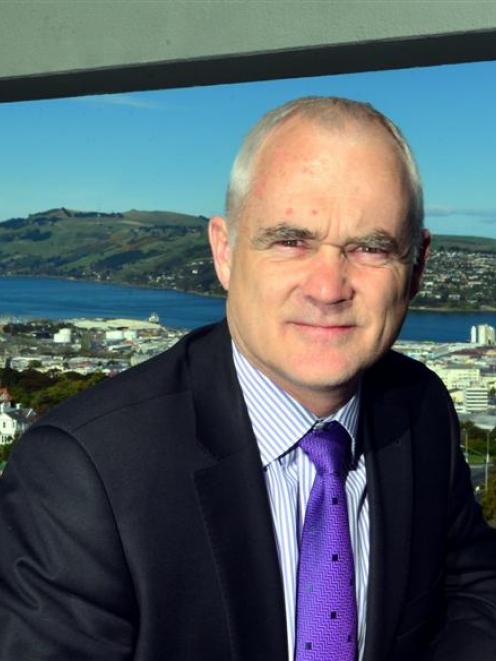 Telecom chief executive Simon Moutter yesterday announced a name change for the group and a new television service. Photo by Peter McIntosh.
Telecom is changing its name to Spark and later this year will launch ShowmeTV, a new internet television business, the company announced yesterday.

''The rapid growth of better broadband via fibre and VDSL [very-high-bit-rate digital subscriber line] means watching TV via streaming over the internet is now a much more viable option for New Zealanders.

''We believe the time is right to enter this market and provide New Zealanders with exciting new choices when it comes to watching video entertainment.''

Few details were available yesterday about the content of the new television business, but Craigs Investment Partners broker Chris Timms said the initial content at launch of 5000 hours looked light.

Forsyth Barr broker Suzanne Kinnaird said the launch of the new on-demand service would be expensive in terms of content acquisition and development but it was likely to gain a foothold in the 2015 financial year.

Mr Moutter said the name change would mark the next step in the changes made during the past year.

As a company, Telecom had moved beyond the home telephone.

''Spark represents what we are today - it is all about digital services, fibre, mobile, data, cloud, entertainment, apps or whatever new technology is around the corner.''

Spark would continue to use the current Telecom logo, which he said was generally referred to as a ''spark''.

ShowmeTV would offer New Zealanders a new choice of how to get their home entertainment, which the company believed represented the future of how people would access content.

''It's a great example of how this company is changing by delivering the sorts of new services our customers want,'' he said.

Telecom reported a flat bottom-line profit for the six months ended December of $167 million. However, the accounts showed reduced revenue, operating earnings and after-tax profit. Only the inclusion of $20 million in discontinued earnings, net of tax, kept the profit in line with the previous corresponding period.

Mr Moutter said the first-half results demonstrated a pace and level of change he believed was unparalleled in a large New Zealand business over the past decade. Previously, Mr Moutter was chief executive of Auckland International Airport and before that he worked for Telecom.

''We don't intend to slow down. We will continue to address our cost base and strengthen our organisational performance. We will focus even harder on becoming more relevant to customers and to modern New Zealand, particularly as we continue our intended transition to Spark.''