Otago prison has too many inmates, minister says 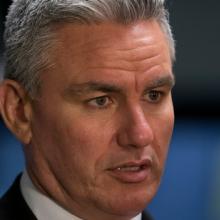 Kelvin Davis
Mr Davis made the comment during an interview following Otago Daily Times reports last month on claims of rising violence and tension inside the Otago Corrections Facility (OCF) made by a staff member and a recently released inmate.

Three officers were assaulted over two violent days last month, two of them taken to hospital, sparking a review by the regional commissioner.

Speaking before the visit, Mr Davis said it was his "very strong expectation" for them to have assessed tensions inside and listened to staff concerns.

Despite repeated requests, Corrections would not put forward either commissioner for an interview.

A Corrections media spokeswoman described the visit as "routine," did not say what was discussed, and said there were no "specific outcomes" from the visit.

The ODT recently revealed the number of inmates at the facility reached a record high of 522 in March last year, while 334 were double-bunked as of June 30.

The Milburn facility had a capacity of 305 in 2008, one year after opening, and was designed at the outset to house one prisoner per cell.

Mr Davis said the present population of 466 (as of Wednesday) remained too high.

"That's more than we'd like ... but we're doing everything we can, clearing the arteries of the system."

The minister said he would prefer each prisoner to be housed in their own cell, but blamed the previous government for the high prison population, which peaked last March at 10,820 before beginning to decline, to 9782 on December 31 last year.

"I'd prefer there was no double bunking, but it's a situation we've inherited."

The Government has a goal of reducing the prison population by 30%, while additional facilities, including a new 500-bed facility at Waikeria, would reduce the number of double-bunked inmates, Mr Davis said.

An OCF prison officer source this week called for there to be more Corrections welfare officers in the South Island than the one now employed in the region.

Corrections has four welfare officers nationally, one in the South Island and another three in the North Island, who support staff with work-related or personal issues, and provide rehabilitation support.

The officer cited the case of a corrections officer who died by suspected suicide in 2017, days after returning to work at OCF, and reported by the ODT on Monday.

Six months earlier, the man was assaulted, sustaining a head injury an ACC psychology adviser found probably resulted in a major depressive disorder and his subsequent death, which ACC deemed to be work-related.

His ex-partner said last month the man should never have been allowed to return to work in the same high security wing where he was assaulted, given the concerns held by a Corrections welfare officer and others regarding his deteriorating mental state in the weeks before his death.

Mr Davis refused to comment on the case while it was under investigation by a coroner, as did Corrections, but said he was "more than happy" to look at the request for more welfare officers.

I'm sure most people are comfortable with the higher numbers at this prison....It is a far better situation than using inferior alternatives to incarceration or deliberately releasing criminals earlier into society.

The real issue is ensuring the prisons can cope this increase. Having the correct ratio of staff to prisoners, at ALL times is paramount. The Minister should be looking to provide as much protection to corrections staff and prisoners, as he possibly can.

Unfortunately, it will likely take a death at this facility before any action is taken.