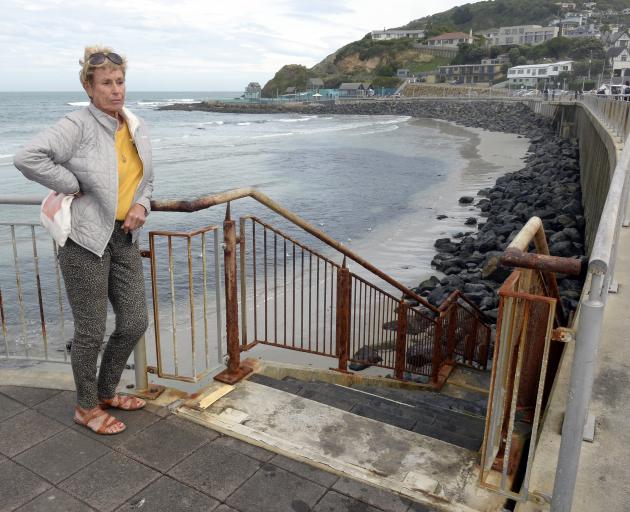 Lorna Casey has lived in the Dunedin suburb for 40 years and said the popular beach front was in disrepair.

She believed the Dunedin City Council had allowed rust to take over the Esplanade, which created an eyesore for both locals and tourists, and she called on the council to respond.

"It gets your back up when they are doing all of this stuff around town and in the Octagon, but are paying no attention here," Mrs Casey said.

"I love this place and I just want it maintained."

Her concerns included a "severe" amount of rust on the stairs, handrails and benches, including a flight of stairs leading to the beach, which became unusable and were consequently closed to the public.

She believed the damage occurred about four years ago, if not longer, and should have been repaired or removed.

Planter boxes remained empty, for what felt like years, and she could not understand why a drain was never put under the water fountain, which constantly covered the footpath with water, she said.

Updates on council projects on the DCC website showed the last replanting of planter boxes and garden beds along the Esplanade was at the end of October 2017.

Mrs Casey said she wrote to the council early this month.

She was told her email would be passed on to parks and recreation but did not receive further contact.

One of her main concerns was a vandalised shed, which had a smashed window and bricks on the roof, which she believed were to keep the roof from coming off.

She believed the shed had been there, seemingly unused, for many years.

The shed has recently been removed.

"We have been advised by the St Clair Surf Life Saving Club that it is no longer needed and it has been removed.’

Mr Drew said a budget of $100,000 would be used to replace the most seriously affected handrails, work which would be done over the next few months.

The rails would be made of stainless steel to prevent rust.

"As part of the Our Coast Our Community project, the DCC will be developing a long-term, holistic plan for coastal erosion, storms and sea level rise and the issues that arise from them," he said.

Mr. Drew has plans now but why didn't he respond to the email? 'She was told her email would be passed on to parks and recreation but did not receive further contact' Others have this experience all the time.DCC staff should thanks locals who are concerned enough to give up their time to bring this to staff attention.

Good on you..St Clair is a vibrant part of Dunedin but neglected by DCC.

Hope the council do their research into which type of stainless to use...

Good comment, but good luck with that ,and let's hope they finally understand that a 'sausage' does nothing. Try vandalizing AKMONS........but again, good luck with that too. But hey, at least the rates are rising at the same rate as sea levels......