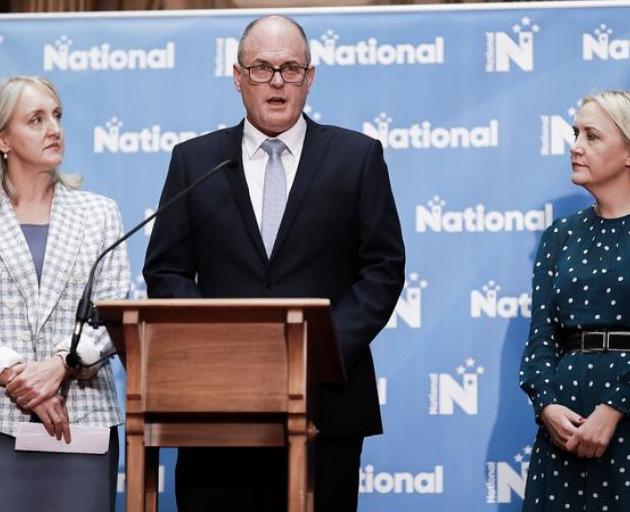 Todd Muller flanked by Amy Adams (left) and Nikki Kaye earlier this week. Photo: RNZ
A trip to the South is a priority, new National Party leader Todd Muller says as he settles into his new role.

The MP for Bay of Plenty emerged from relative obscurity to win a caucus vote last Friday and oust Simon Bridges as the party’s leader.

With the election looming in September, Mr Muller said he had little time to get around the country and introduce himself to voters.

‘‘One of the highlights of the job is getting out and about and meeting people, and in my climate change and agriculture roles I’ve been down your way a number of times and am very keen to do so again.

‘‘We have three very big blue seats down there, and the electorate of Taieri is potentially quite solid for National.’’

Dunedin list MP Michael Woodhouse retained his seniority and health spokesman role, despite being a supporter of Mr Bridges.

Mr Muller said he did not care who Mr Woodhouse voted for, that he rated his performance in health highly, and that that was why he had stayed in the role.

‘‘He’s very talented, and this was not about who voted for who.’’

Mr Muller said Mr Yule was an obvious choice for the role, but he also wanted Mrs Dean to dedicate her time to her recently acquired conservation role.

‘‘I rate her highly and I think she will continue to add a huge amount in the conservation portfolio.

‘‘It’s a passion of hers, which I know having been to her electorate two years ago with the Blue Greens.’’

‘‘Land information and forestry are arguably two sides of the same coin and will work together well for him.

‘‘He is a tireless advocate for his community and, of course, for tourism in the South Island and Queenstown in particular.

No amount of helium and blue spray paint will float the lead balloon. But good luck to them.