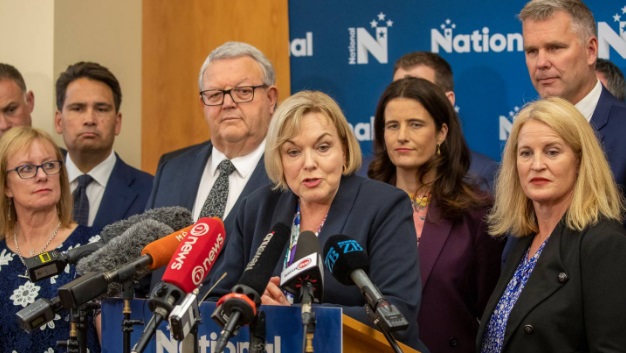 The substance of the review and the reviewers are yet to be determined by the party's board.

Deputy leader Gerry Brownlee said it was a matter for caucus as to whether he'd stay on as deputy leader.

He said he wanted what was best for the party. He refused to answer whether he thought he was the right person for the deputy role but said he'd done well in the position before.

Today is just the second time the National Party has met after its devastating election defeat, in which it lost 20 MPs.

Party president Peter Goodfellow said the terms of reference for the election campaign review was being drafted this week.

The review would be more comprehensive and robust than the party's usual campaign reviews, he said.

Shadow portfolios would be decided after the new Government announces its portfolios, Collins said.

One of the considerations was to sometimes test MPs in areas they hadn't had experience in before.

Collins said Labour might need the Greens in government to "blame" them.

National's leader said she hasn't considered which portfolios she would like, besides national security, as she wanted to know what roles her MPs were keen for.

Much of last week's caucus meeting was about farewelling those who lost their seats or have said they would be retiring after the election.

But today's meeting is likely to be a lot more forward-looking, as National looks to be the "strong opposition" that Collins promised.

Speaking to Newstalk ZB last week, Collins said she would be sitting down each of her MPs for an "honest" discussion in which they will be able to privately air any concerns.

It will also be an opportunity for them to pitch for what shadow portfolios they want.

After Todd Muller resigned the leadership in July, Collins said she and deputy leader Gerry Brownlee were given "the hospital pass from hell".

She has previously spoken about how she reluctantly became the leader of National, after she was asked by the caucus.

"We were thrown it [the leadership] and we ran with it as far and as fast as we could."

National's caucus meeting comes as Labour and the Greens attempt to hammer out a government-forming deal this week.

Labour, which won 64 out of 120 seats in the House, does not need the Greens to govern.

But the two parties are holding talks every day this week to figure out how the Greens can fit into the Labour government.

Prime Minister Jacinda Ardern confirmed that those talks are likely to conclude by Friday.

I hope National, in their review of their massive election failure, are honest with themselves. They need to realise that their opposition to the Govt's management of Covid19 was totally rejected by their members. It is a time of national crisis, working alongside the Govt and asking what can we do to help would helped retained their votes. Collin's style of leadership, what I call "hit and run". Constantly looking for the snappy one liner with no substance behind it, combined with her undisguised blind panic at her inability to attract a following let her down badly. She needs to try a little empathy, practice faking sincerity, like John Key used to. Policies, well... Just bereft of ideas really, that's going to be their hardest area to improve. They just don't have the economic depth of experience any more, at least to compete with Grant Robertson who is arguably the most able Finance Minister NZ has had in many years. Uphill struggle there I'm afraid, even if National do overcome their underlying leadership woes.