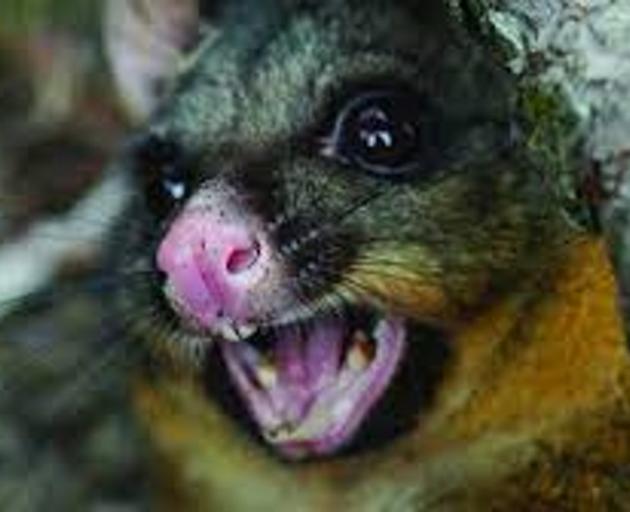 PHOTO: ODT FILES
A Dunedin  woman who had been caring for the possum dubbed the ‘‘Blacks Rd Ripper’’, so-called after apparently holding another woman hostage, is hoping to find the animal to have it spayed.

Late on Sunday night, a distressed woman called police to report she was ‘‘being held hostage’’ in her Blacks Rd home.

Senior Sergeant Craig Dinnissen said the woman reported that when she attempted to leave her house and reach her car, the possum would ‘‘charge’’, forcing her to flee inside.

When police arrived soon after 11pm they quickly discovered the furry offender after the juvenile possum appeared out of the dark and climbed up an officer’s leg.

The possum was subsequently taken to nearby Signal Hill and released into the wild in order to ‘‘prevent further citizen harassment’’.

The woman who had been caring for the possum said she hand-reared the animal after it turned up on her doorstep earlier this year.

‘‘She’s quite friendly with humans hence the climbing up leg situation ... but her claws were trimmed,’’ she said.

The woman, who did not wish to be identified, was hoping to work with police to locate the animal.

Caring for and releasing possums is a source of contention and online debate.

While the marsupials are protected in Australia, in New Zealand they are considered pests.

The residential area that included Blacks Rd was not included in the prohibited area.

Possums like other introduced species such as trout and people have their virtues!

We are spending thousands of dollars and hours trying to get rid of these pests on the Peninsula and we get this response. Unbelievable. Were the police acting within the law to release it?

It's certainly unbelievable that time and money is being spent on nothing more than violent speciesism. The police did the sensible, and decent, thing.

A pet possum is no different to any other pet as long it is loved and cared for ❤️.

Good luck trying to get the police to come over when you have boy racers tearing through the valley... Next time I'll know better and use the possum approach.