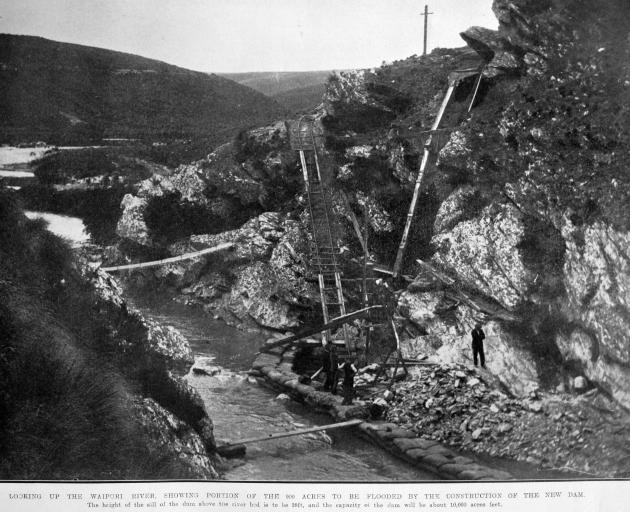 Construction site on Waipori River looking towards the 900 acres of land to be flooded by a 38-foot high dam. _ Otago Witness, 23.5.1922
The annual meeting of the Momona branch of the Otago Expension League was held on Tuesday night in the hall, Momona, Mr A.W. Amos, president of the branch, presiding.
Mr Chas. Todd, president of the league, at the request of the chairman, addressed the meeting on the subject of the election of a power board to reticulate the Taieri and other districts.

Power can be had for the counties around Waipori, and if the country people are in earnest they can now proceed to secure the blessing of cheap electric power.

Mr Todd explained the machinery necessary for the creation of a board, and eulogised the comfort and the security which the possession
of this power brought with it.

A brief outline was given by the speaker of the agreement between the Taieri County Council and the City Corporation, and showed how the power board when elected would be the servant of the ratepayers, and that the benefits of the agreement would not be lost to the residents of the plain.

"The one thing essential is to push your local councillors to support the proposal for the election of a Power Board."

Wellington: At the Secondary Schools’ Conference, Mr Renner, of Wellington College, said there was a danger of the New Zealander’s pronunciation of some words becoming faulty, almost to Cockney. He said that "praise" was pronounced as "prize", "my" as "moy", "now" as "neow", "go" as "gow", etc.

After a lengthy speech he moved that the attention of all examining bodies, the university and all educational authorities be called to the widespread prevalence of a wrong method of speech and pronunciation, and that the association requested such bodies to take action by means of suitable training methods, viva voce tests, and all means in their power to foster a standard system of pronunciation, and thus check the growth of any New Zealand dialect.

The motion was seconded by Mr E.D.J. Hercus (Wellington), who pointed out that the late headmaster of Wellington College (Mr W.P. Firth) had conducted tests with his most promising classes, and had found the standard of diction unsatisfactory.

Music and speech will be transmitted by wireless telephony from the University tonight (Thursday) from eight to ten o’clock.

The wave-lengths will be 450m for the first hour and 475m for the second. It is gratifying to learn that complete installations using one valve can be obtained in Dunedin for £20.

With those sets the concerts are heard very loudly, and wireless telegraphic messages from New Zealand stations, ships, Sydney, Melbourne, etc are easily picked up. This price is much lower than is being charged in other parts of the dominion, and the results are certainly excellent with those manufactured locally.

The Wyndham Herald reports that Mr William Gibson, who is well known as a farm labourer in that district, has come in for a legacy of £13,000.

He tells us that this was left to him by a bachelor cousin in Scotland.

His cousin engaged in farming a large property, and he told Mr Gibson that, should he not marry, he would make him heir.

A letter from Mr Gibson was enclosed with his will.

Momona, we are not falling under your spell.