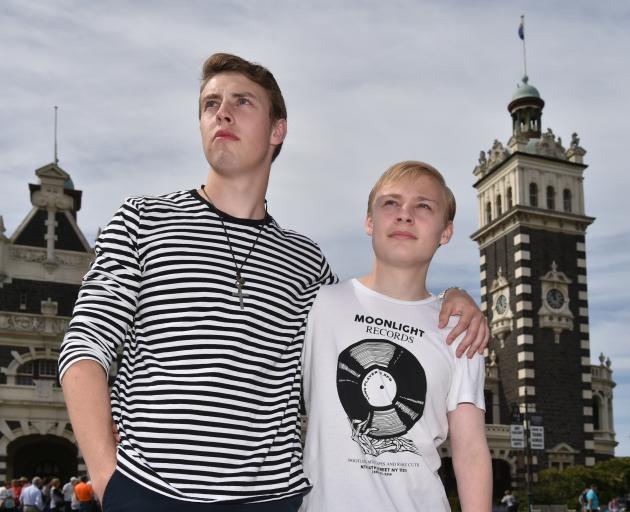 More than 7200 signatures have been received in just five days, since the von Metzingers' eldest son, Travis, launched a last-ditch online appeal for his family to remain in Dunedin.

''It seemed like the only recourse we had,'' Travis said.

''I was hoping we might get 1000 by Monday: getting this many signatures shows there is a reason for us to stay.''

The von Metzingers arrived in New Zealand nine years ago and made Dunedin home. The boys' father, Steven, has worked as a consultant for the Dunedin City Council, Allied Press and the University of Otago. Their mother, Joan, is active in charity work.

Travis (18) has put health sciences studies at the University of Otago on hold due to the residency issues.

The family could remain in New Zealand on a work permit, but after so many years in Dunedin wanted to settle permanently.

The sticking point for the von Metzingers obtaining residency appears to be Ethan (15), who had a kidney complaint when the family moved to New Zealand.

''I had surgery when I was young so that doesn't happen any more: my kidneys are stable, and they have been stable for a long time, and I haven't been sick since.''

Mr von Metzinger said the family had made allowances for Ethan's condition - which might one day see him need a transplant.

''For 14 years doctors cannot tell us whether Ethan may or may not need a kidney transplant; we have acknowledged this all along,'' Mr von Metzinger said.

''I don't want money from the Government. I will pay for it (a transplant) if needed ... but they have said the application fails to meet health standards and the level of public acceptance.''

After two failed applications to the Immigration and Protection Tribunal, the von Metzingers decided against taking an expensive and uncertain appeal to the High Court and resigned themselves to deportation.

The online petition has sparked hopes Immigration Minister Iain Lees-Galloway could exercise discretion and grant the family visas to stay.

Immigration NZ operations director Peter Elms said all migrants needed an acceptable standard of health so as not to impose undue costs on the public health system.

''In August 2017, the family exercised their right to appeal against deportation on humanitarian grounds to the IPT,'' Mr Elms said.

''INZ notes that in September 2017, the IPT declined the appeal as the 'tribunal was not satisfied that it would not in all the circumstances be contrary to the public interest to allow the appellants to remain in New Zealand'.

''The IPT ordered the grant of work and student visas for a period of four months to allow the family to settle their affairs before leaving New Zealand.''

The von Metzinger should've changed their name to something more simple - like Thiel. We welcome people with names like, the contribution they make and accept the honesty of the claims they make to get citizenship.