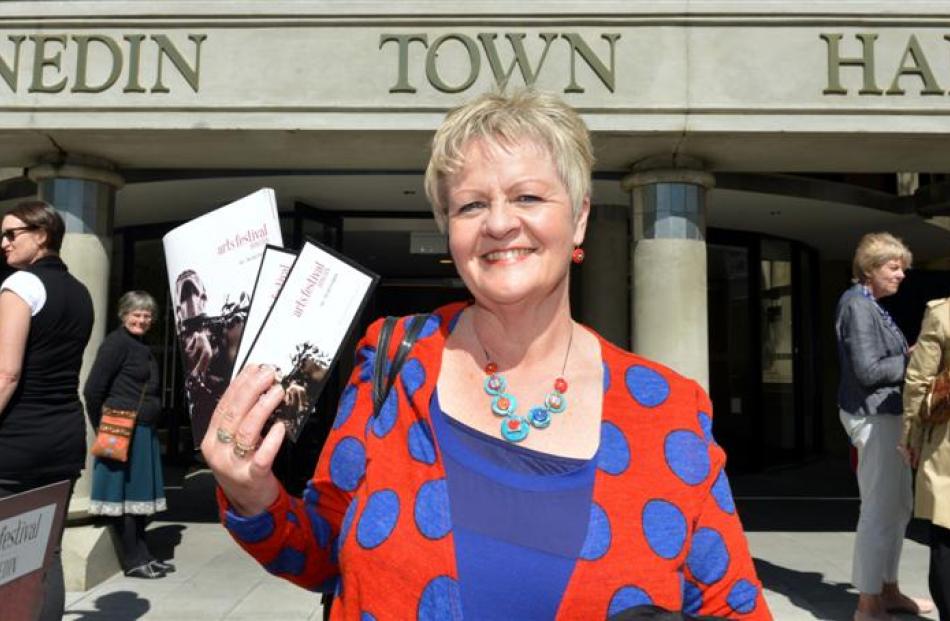 Debbie Vercoe (55) holds her Arts Festival Dunedin guide and tickets to Requiem for the Fallen before entering the Dunedin Town Hall yesterday.

The Dunedin drama teacher said she had seen 13 Arts Festival Dunedin productions - Sisters in Arms, Sonic Psalms, Nick: An Accidental Hero, Sei'O Fafine, The Caretaker, No Holds Bard, Moon at the Bottom of the Garden, Odyssey, the Vogel St Street Party, Strike, OneOne, Pallette of Poetry and Requiem for the Fallen.

''I feel quite satisfied ... I tried to cover the field but there were performances I would have really liked to have seen but the dates and times clashed.''

She took something from each production but a festival highlight was Sonic Psalms in St Paul's Cathedral.

''It was sublime: the atmosphere in the cathedral, the programme presented, the choir singers and the way it was orchestrated and choreographed - it was absolute food for the soul.''

Mrs Vercoe said the play Nick: An Accidental Hero would ''forever'' stay with her.

''Renee Lyons captivated me for every second of her performance.''

The performances she was disappointed to have missed were Tim Finn - White Cloud, Promise and Promiscuity, Olveston at Six and Kaha.

''He was in my first drama class back in the day and I've been following his career with great interest.''

Mrs Vercoe said she had a ''passion'' for theatre and music.

For 32 years had lived in Central Otago but was now happily residing in Dunedin - a city with a ''vibrant and exciting'' art scene, she said.