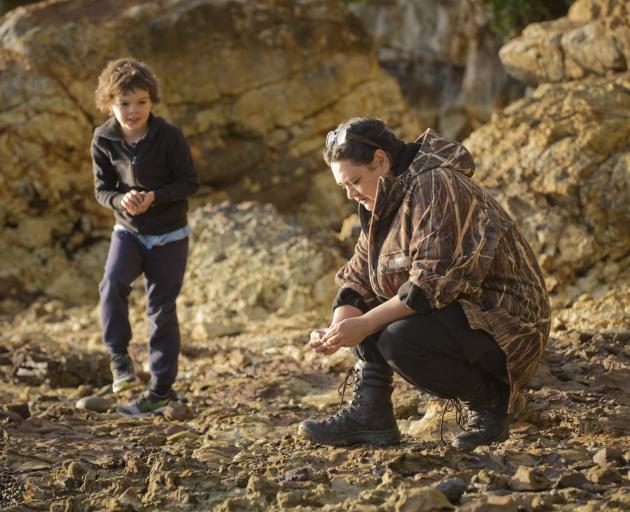 Sarah Hudson and her daughter Te Po Ataru (6) search for earth pigments at Whakaohorahi Broad Bay. PHOTOS: GERARD O‘BRIEN
Earth pigment artist Sarah Hudson has been making the most of her time in Dunedin as the Caselberg Trust's Creative Connections Resident 2022. She tells Rebecca Fox about her love of earth.

Walking slowly along the harbour’s edge, Sarah Hudson has her head down looking at the ground.

She is carrying a small shovel and wearing a bum bag containing paper bags.

Her daughter and partner are often at her side.

"I focus on sustainable art resources from the land and earth pigments. It is really wholesome, a nice family practice," Hudson (Ngāi Tūhoe, Ngāti Awa, Ngāti Pūkeko) says of her artistic practice searching out earth pigments.

She also sees it as a cultural practice bringing her closer to her ancestors who used the pigments in every day life as paints in art, in ceremony and in medicine.

"There are amazing early accounts of what Māori looked like wearing colours, coloured oils in their hair, as decoration to stand out or as a great communicator to say stay away or come closer."

"Spending time on the land, thinking about these stories and recreating some of these practices for me and my family is a cultural practice as well."

For the past three months she has been searching Whakaohorahi Broad Bay on Muaūpoko Otago Peninsula for different pigments — soils, silts and clays — to add to her collection and use in her art.

"It’s been an amazing autumn here. I’ve collected a beautiful earthy rainbow since I’ve been on the peninsula. The Otago volcanic history offers up a really rich palate."

What she has found has been used to create paintings and video for her first solo exhibition in many years "re:place, He rokiroki, he penapena, he rākei whenua", at Blue Oyster Gallery.

Hudson, who lives below Kaputerangi in Whakatane, first discovered earth pigments on a road trip with friends Lanae Cable and Jordan Davey-Emms to see Māori rock art drawings in their region.

Standing in front of a petrograph, a carved rock wall, featuring a lot of different waka, Hudson realised many people of differing ages had added to it.

After visiting other sites, they headed home and on that journey Hudson had the thought that if their ancestors made paint that could last 100 years, why did she not know how to do that?

"It was a real gap in my knowledge base. At art school we never talked about how paint could be made or sustainable art practice or having a relationship with the materials you are using."

The trio, with their combined backgrounds in art, pottery, whakapapa (genealogy) and Māori plant medicine, created Kauae Raro Research Collective in 2019 to research earth pigments and Māori uses of them and publish their findings online. They have also held workshops for adults and children.

"For a year, every week we went for a walk looking at the whenua and talking to people."

It was a pivotal point for Hudson, who before that had mainly been working on short project-based multimedia projects — she studied photography — working from one contract to the next.

"The concepts have always been the same. I’ve always been really interested in land and tino rangatiratanga, Māori sovereignty and agency." 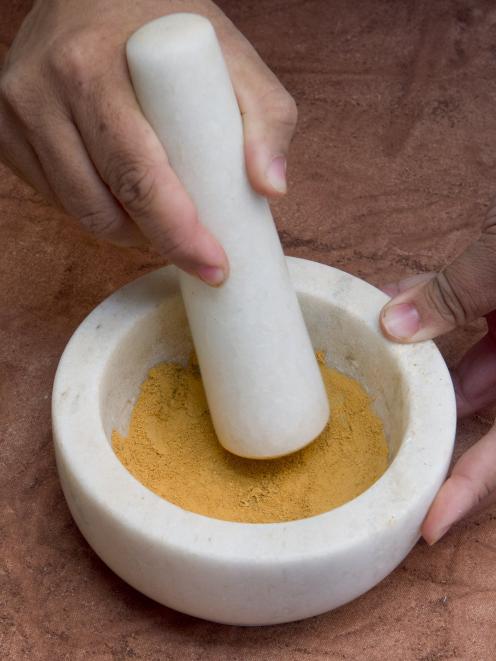 Sarah Hudson crushes the clay she found into powder for paint and dyes.
But after she discovered the earth pigments her work became more of a "real practice", slowing down and having a long-term focus.

"There are all these questions and I hope eventually to get to know the answers but I’m not in any rush to know all of the things immediately.

"Having the material be the thread alongside the kaupapa, the concepts, has really boosted physically what I was always trying to say conceptually, I guess."

Her Broad Bay project is a celebration of all the colours of the bay. Originally she had planned to survey the whole Otago Peninsula but found enough to satisfy her in the bay.

"It was really rich and really varied and I’ve got thousands of colours just from Whakaohorahi, it’s great."

Place names are often a clue to what she might find as Māori place names often hold a lot of information — Pukekura or Taiaroa Head means red hill so it might mean there is red soil.

"It’s a bit of a detective game. It’s a long game for colour gathering, that as part of the practice I go for walks and touch rocks. Some make really beautiful paint and some don’t and what isn’t used goes back."

The samples she digs up are crushed up by hand using a mortar and pestle her mother-in-law gave her, into varying different size grains, some down to powder to be used in fabric dyes or paints.

"Some take a lot more effort than others. Sometimes the effort is worth it, sometimes it is not."

There are certain colours in the Māori palette that carry a lot of significance, in particular red, so earth with red pigments is something she is always searching for.

"Sometimes you find a red rock, you think this is it, but when you crack it open and inside its yellow."

Those with the colours she is seeking are turned into paint using natural binders such as native tree gums and honey, just like it used to be made, so it can be returned to the land with very little impact ecologically.

This exhibition is about the process and celebrating the resources that are available so raw and processed samples will be on display as well as paintings, a new endeavour for Hudson.

"I’ve been making paint for a long time and I keep an archive of all the paints I create. Sometimes it is fun to follow the material through."

It also references her whakapapa and the lineage of the rock art of her ancestors which has stayed around for generations to see.

A theme of her work for many years, the archway, has also reappeared in this like "a portal through time"as it becomes more prominent in her practice.

"It kind of squishes time. It’s representative of a lot of things, a cave, the rock art, all the different ways to communicate and express ourselves."

So she used her hands to paint a lot of different surfaces and then added the details.

"It was real fun, it’s a really physical process where you get to know your material, you meet it and touch it straight away."

Some of the paint she used still had that gritty texture of rock in it.

"I didn’t want to pretend it wasn’t rock. It’s not a finely milled pigment industrially made. I like that it comes from rock."

When she first started making paint, the idea was to create paint that would last generations, like her tipuna.

"I quickly shifted to wanting a practice that I could return to the land without harming it and have a relationship with these materials. I want to have a light footprint with my practice."

For Hudson the searches have opened her eyes to the abundance available at her feet.

"These are the same colours available to my ancestors and it’s free, you get fresh air and it’s fun."

If any dirt is being turned Hudson will be there, whether it is roadside cuttings, her friends putting in a new driveway or large construction sites. She is often called in by iwi to do cultural monitoring on new building sites.

"There are a lot of contemporary opportunities to look at dirt which our ancestors could not have fathomed."

It has also created new opportunities. The collective has been consulted by their iwi around colour palettes being used in its rebranding.

"There is such a wide range of uses that we’re stumbling into as we go along."

Being part of a collective is an important part of Hudson’s practice.

"I love to work collaboratively, you get to really focus on community a lot.

"You have to take ego out of the equation when you are working as a group. I love getting together, talking about ideas and it all goes into the pot and merges as one." 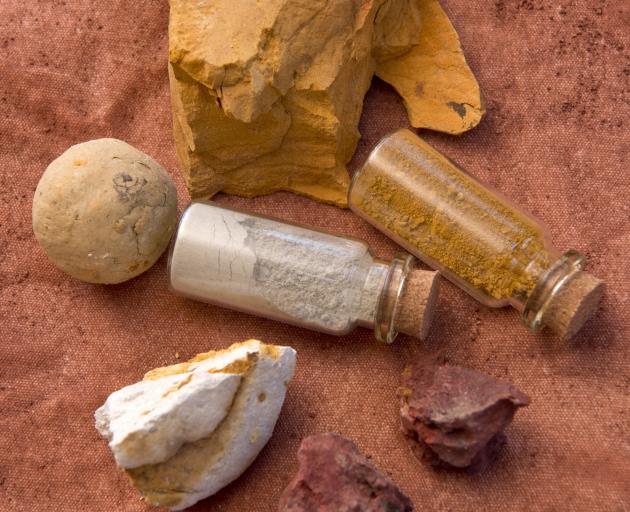 Some of Sarah Hudson’s finds at Whakaohorahi Broad Bay and the powder they create.
Hudson has been part of the award-winning Mata Aho Collective since its inception 10 years ago.

Inspired by customary Māori textile practices and industrial materials, Mata Aho creates large-scale installations and was nominated for the Jane Lombard Prize for art and social justice in New York in 2020 and was awarded the Walters Prize here in Aotearoa in 2021.

"It has allowed me to be an artist for a job, which is really rare. It’s why I love collectives — it’s four mates sharing life for 10 years, which is pretty choice."

So opening her first solo exhibition in many years is quite "freaky", she says.

"There are not other people to shift attention on to. In Māori culture, for Tūhoe in particular, humility is the utmost personality trait you must display at all times, so to put yourself forward as an individual feels unnatural to me."

However, she still brought other artists in to work with her on the exhibition. Local videographer Rachel Anson has filmed video works for her and Wellington composer Te Kahureremoa Taumata has created audio for it.

"I couldn’t help myself. I had to bring people in. It’s my practice too.

"I love sharing. I run workshops and apply for funding and divvy it out. I love community and contributing back."

Hudson has also organised the first national symposium for Māori earth practitioners to run alongside the opening weekend of the exhibition.

Twenty Māori artists will spend a weekend in Dunedin sharing resources, knowledge and listening and "eating lots of food".

"Some of these people I’ve been talking to for two years but not yet met them."

Hudson is appreciative of the Caselberg Trust enabling her to bring her husband and 6-year-old with her, which made the residency possible.

Her goal is to try to carve out a family-friendly art life.

"Quite often art things are really suited to an individual, so to have the opportunity to bring my whanau along for a good chunk of time is quite unusual in the art world. It’s not super family-friendly."