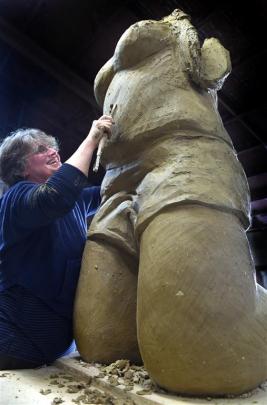 Suzanne Emslie works on one of her supersized clay figures. Photos by Peter McIntosh. 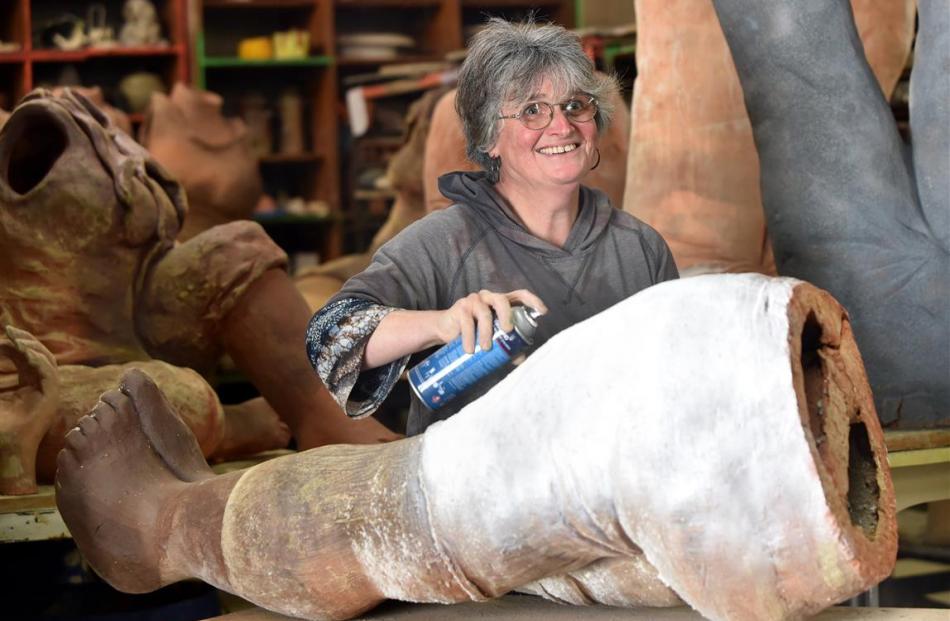 Suzanne Emslie works on one of her supersized clay figures. 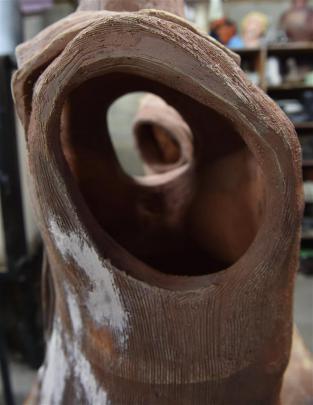 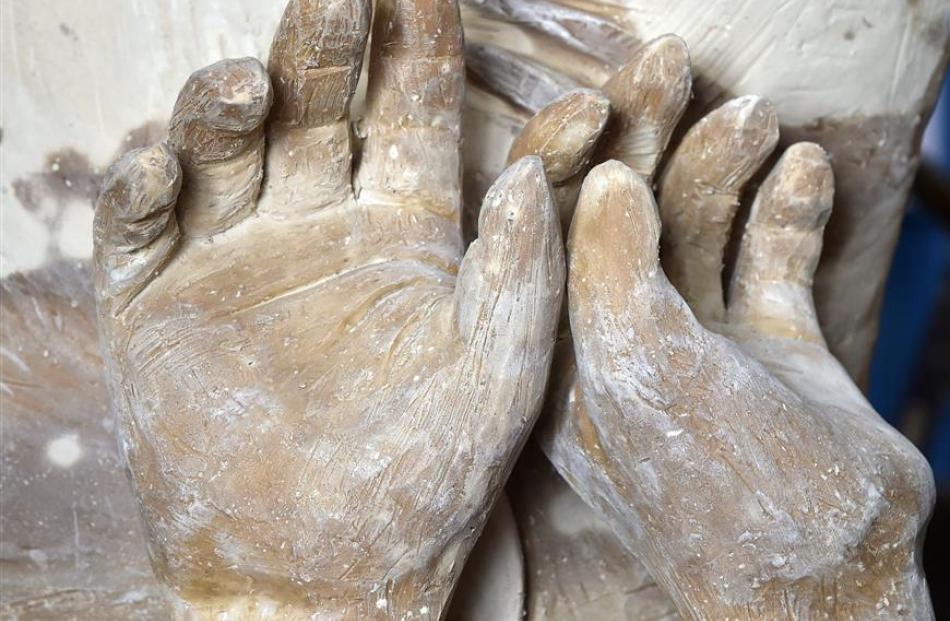 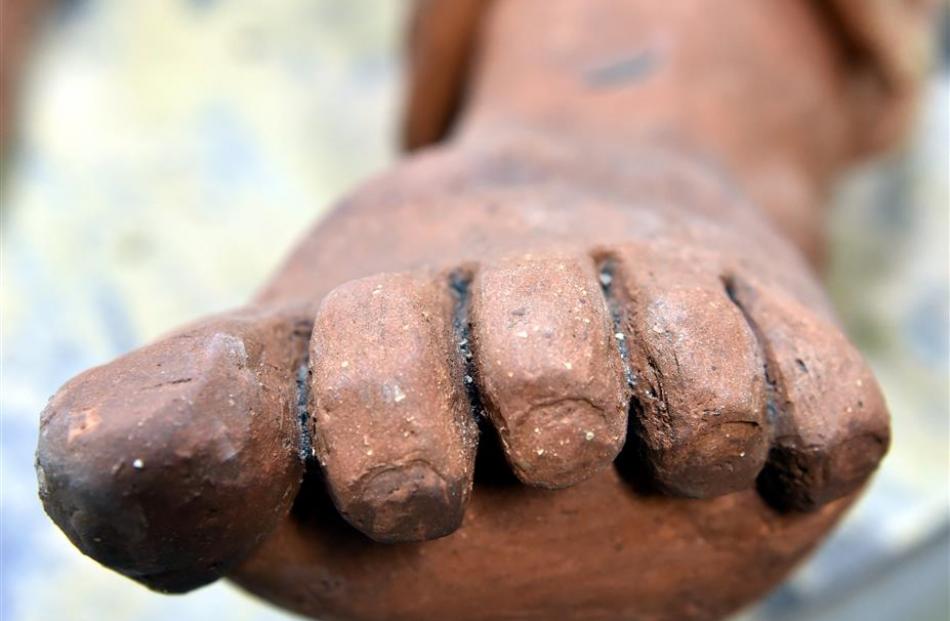 A ‘‘once in a lifetime opportunity'' is how artist Suzanne Emslie describes her latest artistic endeavour. She tells Rebecca Fox how she is immortalising her family as supersized clay figures.

Hearing stories from her mother's family of their days growing up on a strawberry farm Suzane Emslie could just imagine the fights.

So much so she is re-creating one of the ‘‘fights'' in clay. Not in a mantelpiece way but in a larger-than-life way.

The figures are huge, the largest over 1.8m tall. Oh and its not a small family: there are 11 children, including seven girls.

‘‘The girls had their own rugby team as teenagers. They were a force to be reckoned with.''

Walking into the ceramic studio at Otago Polytechnic people could be forgiven for being startled by the oversized body parts littering the workbenches, everything from the heads not yet given features to the upside down 1.5m-plus men's trouser-clad legs.

All are being painstakingly re-created by Ms Emslie, who is dwarfed by her creations.

While hollow, they have thick walls so each weighs 100kg-150kg and takes a team of people and a winch trolley to move.

While some of the figures - the two men - will be standing, the women will be sitting, throwing strawberries at the men.

‘‘They're letting their inner child go. They're eating strawberries, throwing them, using slingshots.''

Ms Emslie is creating the figures out of paper clay for its strength, building up rough coils of the clay to create the bodies and then scraping them smooth and etching the details. The hands, feet, arms and heads are sculptured separately.

‘‘I think my arms have grown two to three inches longer lugging the clay [around]. I can't tell you how much clay I've used. I run out of clay constantly. I reconstitute whatever I find.

‘‘It is very physical work, 'cause I work the clay in quite a sloppy state. It adds to the strongness of the structure. I've found the material is so malleable.''

She was funding the project, which had so far cost about $7000 in clay alone, herself.

‘‘I've eaten instant noodles a few nights. But that adds to it.''

She thinks the need to make the figures so big came from a recurring nightmare she had as a child of her aunts coming into the room getting bigger and bigger until she opened her eyes.

‘‘As a kid in those days you were made to sit on the floor and these big towering women would come into the room. They were quite an overpowering bunch.''

The project had, at times, become overwhelming and she had closed the door on the project for a bit.

‘‘You are trying to be kind. I'm using my family to mirror these figures and you can't help that it brings up memories. Pulling back to the humour has helped me complete these.

‘‘And the interest of the family, who want to come and look and see photos, has helped me complete as well.''

It took 14 months to get to the point where she was ready to start firing the figures. She was not happy with four of the figures so she pushed them over.

‘‘It was quite liberating to stand on the table and push them over.''

The largest kiln at Otago Polytehnic is needed to fire the works. All up it takes a day to get a torso in the kiln and another six to dry it.

‘‘All but one had come out extremely well with just a few surface cracks.''

Once out of the kiln, Ms Emslie is painting and adding material to the figures to bring them to life. The ‘‘clothes'' and the ‘‘splatter'' from thrown strawberries are etched in the clay.

She also planned to make about 100 clay strawberries to scatter around the finished artwork.

‘‘The exagerated humour will come out.

‘‘It is a kind of a mission but it adds to the enormity of it as well because its all about this kind of oversize play: the big feet, big hands, big guestures. Some are larger than life, some are twice as large.''

She had been collecting clothes from the '50s and '60s which is when her relatives were children (they are now aged in their 60s and 80s), to use on the figures. Spray adhesive will be used to stick the fabric to the folds etched in the figures.

‘‘It will be a good challenge in itself.''

The trousers and shorts on the figures will be created with textured paint, which she is currently experimenting with. She hopes to create a moleskin-like texture for the males' trousers.

With eight weeks until the figures are due to be finished, she is confident she will meet the deadline.

The concept had grown out of Ms Emslie's art studies during the past seven years at the polytechnic. Last year, she looked at self-portraits but thought families had much to do with how people are shaped so decided to do a family portrait with a difference.

‘‘In the past I've sort of concentrated on the human body. I've always looked inside, feelings-wise but this is all about letting go, having a bit of a play.

‘‘I looked more outside, more at my family. My mother is one of 11 so there was that thing if you didn't stomp your feet hard enough you weren't seen. So this is what these guys are doing.''

Before embarking on the project, she made smaller versions of the figures, about 30cm high, out of solid paper clay to get an idea what they would look like.

‘‘Makes it all quite organic.''

Formerly a cartoon artist and office worker, Ms Emslie had worked carving stone for 10 to 12 years but always liked the idea of sculpting and once she had touched clay there was no looking back.

‘‘I saw sculpture being made in stone and it went from there.''

The project is part of her master's degree. She has already completed a visual arts diploma, and in the future hopes to train as a teacher.

‘‘I've spent seven years here. It is a once-in-a-lifetime opportunity.''

Given her cartoon background there was a risk the figures could become caricutures, so she was trying to pull that instinct back.

‘‘They'll be more complimentary that way, of course.''

So far her family had mixed reactions to her project.

‘‘The youngest member of the family wants to take hers away and put it in her garden.

‘‘The oldest, they're quite unsure about what they feel. They want me to do them justice. My mother wants me to lessen the waste. As much as I mirror it on someone, someone will see someone else in them.''

She had not yet worked out which figure would be which aunt but thought that would come through as she sculptured their faces.

‘‘The body language will portray their personalities. They're dying to know who is who.''

The figures were destined for the garden at Glenfalloch, where Ms Emslie hoped people would enjoy them, touch them and climb over them.

‘‘I want people to touch them, to pick up the strawberries. They'll be so robust it won't be a problem. They'll weather really well.''