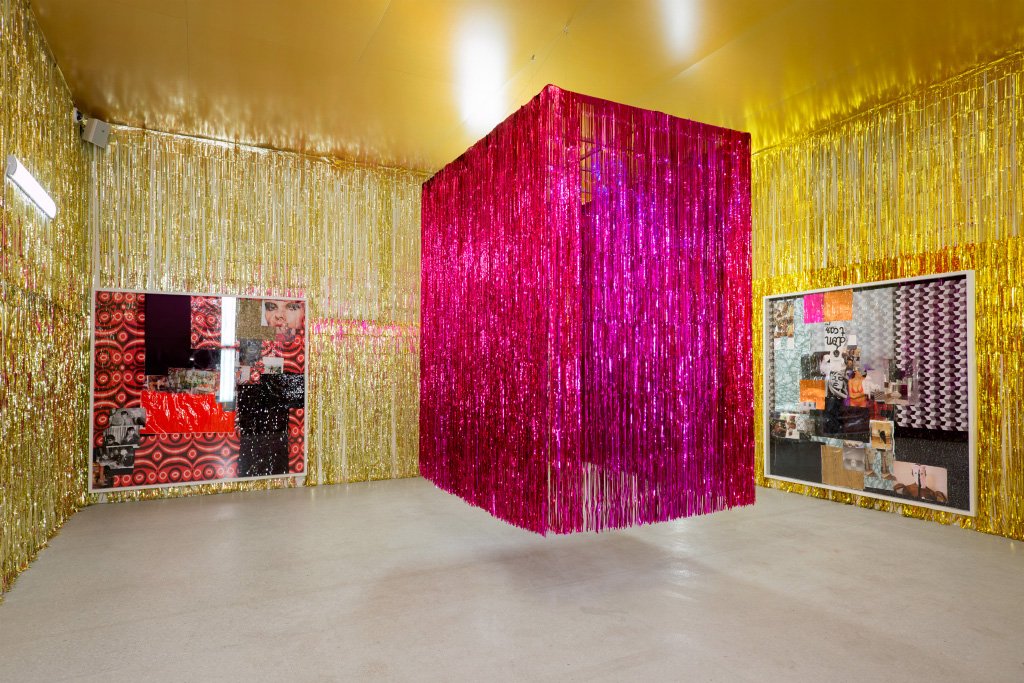 The Making of Mississippi Grind 2017 is a site-specific work commissioned by the Chartwell Collection and Auckland Art Gallery.

''Plus private sponsors because it was expensive to make,'' Fraser says.

Established in 2002, The Walters Prize is considered the top award in New Zealand visual arts.

Every two years, a jury selects four works which represent the most outstanding contributions to contemporary art in New Zealand during that time.

The works are then exhibited and a winner selected for the $50,000 prize by an international judge.

It is the second time Fraser, who studied at Elam School of Fine Arts at the University of Auckland in the late 1970s, has been nominated.

Her 2018 nominated work is a ''fictional remake'' of the movie Mississippi Grind about two losers who gamble their way around the Deep South of the United States.

''Weirdly they win, which is why I chose that movie.''

It is part of a series, ''the making of'', involving individual collages that she has been working on for 15 years and has recently exhibited at Michael Lett Gallery in Auckland.

The nominated work has also been exhibited recently in the United Kingdom, Switzerland and France.

In the installation, she projects the actual movie on a loop. Then every five minutes she plays a rap song from the last couple of years to make it feel more contemporary.

''Twenty different songs altogether on a loop. The voices of the movie keep bickering away until they get drowned out by Kendrick Lamar or Migos etc.''

She then painted the entrance corridor pink and added pink tinsel, so it was very bright.

In the main gallery she added a false gold metallic ceiling to mask the wooden Auckland Art Gallery ceiling. Then she added fluorescent lighting, making the projection very faint with ''just a slight shimmer of light''.

To re-create the casino ambience of the movie, she lined the walls with rows of gold tinsel.

''The centrepiece was a huge 'faux' chandelier of hanging tinsel which everyone hid inside. Children ran in and out dancing to the music. It was very popular.''

Lastly, she added 3m x 2m square framed collages. They are of fictional people in a ''making of type'' situation about the movie remake.

''I choose the images from art books, magazines, old gardening books, rap magazines etc. Anything unusual or weird. Then the collages are mounted on a background of luxury European fabrics.''

The prize's jury says the Making of Mississippi Grind 2017 ''operates as a sponge for an array of popular cultural references, casting a seductive gaze towards celebrity, rap culture and high-fashion''.

''The installation exemplifies Jacqueline Fraser's ability to create viscerally charged domains at an architectural scale; complete with a gold ceiling reflecting pink and gold tinsel from the walls and chandelier, and pumping soundtracks including Rhianna and Migos.

"The light from the film Mississippi Grind was projected across the space, its soundtrack muffled every five minutes by one of the rap songs.''

The artist, who lives between Auckland and New York, is intensely private, revealing little about her private life.

Her biography shows she has held residencies in Paris, won awards in Australia and the United Kingdom and exhibited around the world.

In 2001 she, along with Peter Robinson, represented New Zealand in its inaugural presentation at the Venice Biennale. Fraser's installation work, A Demure Portrait of the Artist Strip Searched with 11 Details of Bi-Polar Disorder, is now in the collection of the Museum of New Zealand Te Papa Tongarewa.

Her work is held in various galleries around the world, including at Dunedin Public Art Gallery.

The other nominees for the Walter Prize are Ruth Buchanan for BAD VISUAL SYSTEMS, 2016; Jess Johnson with Simon Ward for Whol Why Wurld, 2017 and Pati Solomona Tyrell for Fagogo which was exhibited at Blue Oyster Art Project Space and Dunedin Public Art Gallery Rear Window during this year's Dunedin Fringe Festival.

Walters Prize exhibition curator and Auckland Art Gallery curator, contemporary art, Natasha Conland said through the prize people were themselves confronted by the strength of New Zealand art, its diversity and ability to face their current moment with fresh visual exchange.

''It's interesting to see how these artists in their various ways are examining the divergence of 'popular culture', which is unpacked from cultural and gendered positions in their work,'' she says.

''All artists appear to begin with the here and now, and lead us marvellously astray through their architecture, narrative, and playful distortions of space and time in exhibition format.''

The winner will be announced in November.