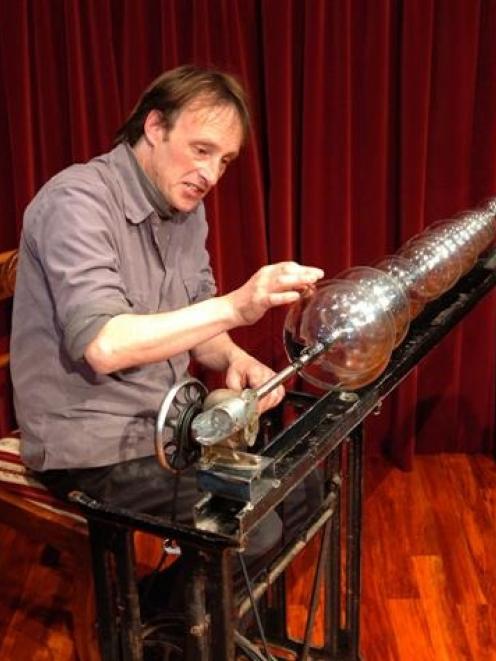 When Taieri Mouth experimental musician Alastair Galbraith was named an Arts Foundation Laureate and handed a cheque for $50,000 in 2006, it marked a coming-of-age for sound in New Zealand.

That demonstration later took place on a glass armonica, a 1761 invention by Benjamin Franklin, which Galbraith made out of a recycled sewing machine treadle and 36 hand-blown glass bowls.

The 42-year-old is one of a growing number of Dunedin musicians with an international profile as a sound artist.

Other Galbraith projects have included running long steel wires through buildings and playing them with rosined fingers.

Dunedin is well represented in the sound art stakes.

Then there is Sandoz Lab Technician, which was formed by Tim Cornelius, James Kirk and Nathan Thompson in Dunedin in 1993, and has produced six albums.

Thompson has also produced three solo electronic albums under the name Expansion Bay and was invited to perform at the Stockholm New Music Festival in 2006.

The Aotearoa Digital Arts Reader is a heavily-illustrated, 208-page compendium of 20 histories and topical essays, along with 11 pageworks by selected New Zealand artists.

Contributors include Otago Polytechnic artists and lecturers Caroline McCaw and Morgan Oliver, while the writing touches on the works of multimedia artists such as Len Lye and Billy Apple, and composer Douglas Lilburn, among many others.

Ballard says the book is designed to bridge the space between academic text and artistic monograph.

"The publication records digital art in New Zealand within a context of critical and historical discussion," she says.

"This book is a national project to scope a field that hasn't been scoped before.

There is currently no single published source that presents the history and contemporary state of new media art in Aotearoa. It's a click of now."

Ballard has been exploring sound and art since the early '90s, when she formed The Sferic Experiment, in Dunedin, with Chris Heazlewood, Sean O'Reilly, Gavin Shaw and Greg Cairns.

"I've always been interested in sound. Art and music for me have always been two things closely interacted. I never asked why music and sound.

"It was always extremely logical to me," she says.

"One of the things central to this medium is it re-evaluates itself all the time. It is essential to the liveliness of it."

The International Symposium on Electronic Art was launched in 1988 and is the world's premier media arts showcase of new technologies in interactive and digital media.

It is held every two years in a different city and brings together artists, theorists, historians, curators and researchers of media arts from around the world.

The Substation Club was full for the event and people were turned away.

The performance was a part of "Cloudland", a showcase of New Zealand artists, which was one of only four exhibitions invited to the event and featured film, video, installation and sound works by Len Lye, et al., Stella Brennan, Alex Monteith, Kentaro Yamada, Bruce Russell, PSN Electronic and Adam Willetts.

The term "sound art" was coined by curator William Hellerman for a 1983 exhibition, "Sound/Art", held at The Sculpture Center in New York.

One of the earliest exponents of sound art was Italian Luigi Russolo, who in 1913 invented intonarumori (intoners or noise machines) to create sounds.

Unfortunately, none of his original instruments survived World War 2.

Musicians Steve Winwood, Nile Rogers, Todd Rundgren and Carly Simon are all exponents, having used the sounds of the humpback whale as backing tracks for songs.

Ballard says it is not a form in thrall to technology.

"I'm very resistent to the idea that technology is changing the world. I'm more interested in how we have historically changed with technology. How we engage with technology," she says.

"For example, what does it mean when cars are driving themselves? Artists are asking those questions the most in this field.

The questions are coming from artists and the celebration of technology is coming from science.

"It's about our engagement with a digital world. They're the skills we're trying to give students; thinking about the process.

"It's those thinking tools that are the most important. The conceptual stuff. Putting together theory and practice," she says.

"A lot of industries aren't interested in what programs a person knows, but how creative they are and whether they can think on their toes."