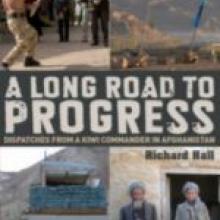 It is increasingly being asked what New Zealand is doing with a civil and military mission in so violent a place as Afghanistan, which is so far from our normal spheres of interest.

This extended diary by a mission commander, Colonel Richard Hall, sets out his reasons for our being there.

He puts a positive spin on it, of course, but makes a good case.

Hall was a retired British army officer who, with his wife, had migrated to New Zealand, where he was an academic at Auckland University.

He was tapped on the shoulder by the Government to spend a six-month deployment leading the programme in Bamiyan province.

It was very demanding physically; six months was quite long enough.

What he found there and had to lead was a provincial recovery programme in a country where the rule of law had broken down and hope was struggling to survive.

The restoration of hope to a society which had been devastated for centuries became his main task.

Genghis Khan, Tamerlane and Nadir Shah are only the best-known conquerors of the last millennium.

Then came the invasion by the old Soviet Union, its brutal withdrawal in the face of the mujihadeen, then savage repressions by fundamentalist religious fanatics in the Taliban.

Tens of thousands were killed.

The Taliban is still a major scourge in the south and east, while corrupt businessmen/politicians and drug warlords seek to control the west and north.

Scattered throughout all Afghanistan's regions are people risking their lives to try to build a decent society for the future, helped by thousands of well-armed foreign soldiers and vast amounts of United States aid.

Hope was what motivated Hall, as well as the Afghan people.

This fascinating book is filled with personal anecdotes of the people he met and with whom he worked.

Not all of them were saints or honorably motivated, by any means.

This is a primitive, deeply and fundamentally religious people trying to recover their country and their own souls while having only a few years in which to make the attempt to adapt to the 21st-century world.

He found it difficult to work with men who, in his eyes, treated their women worse than beasts of burden.

There is an horrific anecdote about a teenage girl raped, made pregnant, aborted with a knife through the abdomen by her family in pursuit of "family honour", and then scorned by her village because "she must have provoked the man."

She has no future in Afghan society; no man is ever likely to marry her.

She is living in a refuge in Kabul with other similar cases.

Yet there are virtues in this society.

There is the physical and moral courage, for example, of Dr Habiba Sorabi, the Governor of Bamiyan - Afghanistan's only female governor.

There are many other examples of brave people he met, and whose contribution is often undermined by corruption.

Their fear of present or future retribution from the Taliban is ever present, and does honour to their fortitude.

Readers must decide for themselves whether the financial costs and physical dangers that go with New Zealand's involvement are worth it.

New Zealand has joined in for political reasons as well as humanitarian ones.

It makes sense to have a number of things on our agenda.

The future is less bleak than it was a couple of years ago as the United States disengages from Iraq and has more money and troops available.

It is only the will of the United States that is making the venture possible and keeping it going.