Home is where the movie is 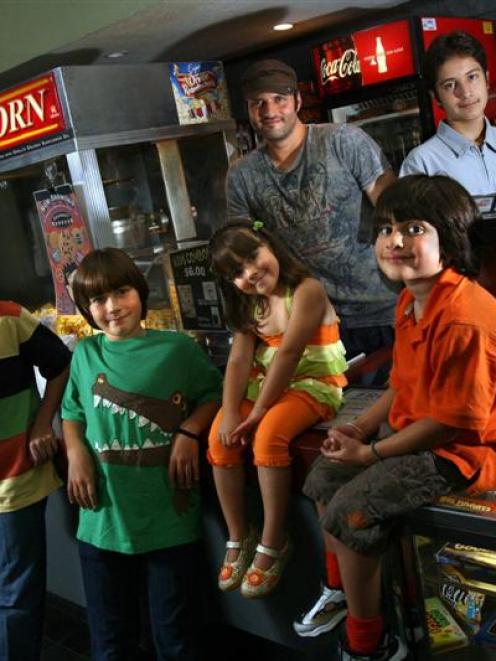 Clockwise from top: Film-maker Robert Rodriguez with his children Rocket, Rogue, Rhiannon, Rebel and Racer. The feature Shorts developed out of family movie nights spent watching the old Our Gang comedies.
One family is bringing new meaning to the family movie genre, reports Geoff Boucher, of The Los Angeles Times.

It was not your typical Hollywood creative meeting. Instead of sparkling water and ahi salad, the Four Seasons Hotel conference room was provisioned with lemonade, chips and a tray of chocolate lollipops.

Magic markers and paper were piled up on the table for doodling, and with good reason: most of the people in the room were children.

Clearly, the Rodriguez boys were back in town.

"We have our way of doing things and, so far, Hollywood seems pretty happy with it," said Texas-based filmmaker Robert Rodriguez, who was sitting with two of his sons, Rebel and Racer, both of whom contributed to their father's newest feature, Shorts.

The contributions weren't small, either: Rebel (10) shrugged and nodded when asked if he was the one who came up with the name of the film. "Yes. It's called Shorts because the kids in it are short, they wear shorts and the movie is made up of all these really short stories."

Who needs a marketing consultant when you have that sort of logic?

Shorts is a collection of interlocking vignettes about kids, a sort of 21st-century revival of the Our Gang comedies, but with a wishing rock, crocodile men and a giant killer bogey. As interesting as all that might sound, the most compelling aspect of the film is how it was made.

Shot entirely in dusty Texas on a lean budget, Shorts is being distributed by Warner Bros but could hardly be further removed from the corporate culture.

Rodriguez was the writer, director, producer, cinematographer, visual effects supervisor, editor, and even collaborated on the music. The film's plot was cooked up by his sons, who also appear in the film.

Essentially, the Rodriguez household put together Shorts the way other families set up lemonade stands, and, after the success of his Spy Kids franchise, there are hopes that Shorts will click with its similarly hyper-real sensibility.

"This whole thing started with me and the kids watching old episodes of the Little Rascals, which I loved when I was a kid," he said.

"They just laughed and laughed. We took that, and it eventually became Shorts."

Rodriguez has five children, all born to Elizabeth Avellan, the Venezuela-born producer. The couple split in 2006 after 15 years but remain business partners in Troublemaker Studios - no mean feat considering the spasm of rumours that accompanied Rodriguez' romance with Rose McGowan, star of his last film, 2007's Grindhouse.

Despite the gossip-page intrigue, Rodriguez is shy and fills conversational lulls with a nervous laugh. Born in San Antonio, he loves his western wear.

Frank Miller, the creator of Sin City, likes to tell the story of how he first met Rodriguez at a New York diner: "He's the only straight guy," Miller says, "who ever wore a cowboy hat into Hell's Kitchen."

He is also consumed with fatherhood and, even before parenthood, daydreamed about making home movies with a large brood. Shorts was supposed to be just that.

The movie started with sibling envy. Rebel was tired of hearing how his older brother, Racer, came up with the premise for his dad's 2005 movie The Adventures of Sharkboy and Lavagirl in 3-D, so he decided that he would mine the Our Gang model for a movie.

These are big thoughts for a kid, but life at the 40ha ranch is geared towards creative fun, with hidden rooms in the main house and cedar-dotted ridgelines filled with arrowheads and the occasional rattlesnake.

That terrain inspired Rebel to come up with the idea of a rainbow rock that grants wishes, and Crocodile Canyon, a nasty pit of reptile danger. The film's unforgettable snot monster, meanwhile, was a leftover idea from Rodriguez's short Deadhead, written when he was 19.

The family fashioned a homemade trailer and when Warner Bros saw it, the lark abruptly became a feature-film property. Rodriguez (41) financed it himself. He declined to specify the budget but said it was "very very low".

"It's rare for the studios to find a filmmaker who wants to make a family film," he said. "To find someone that has an idea, embraces it, has kids and wants to make something exciting - well, they don't see that too often."

He chuckled when asked if the studio suits ever got antsy with his let's-put-on-a-show approach. "They actually like that," Rodriguez said. "You're making it less expensive than they could ever make it here. And they get a movie that they can sell as a big movie. They make money off of it; I get to keep it locked down creatively."

Rodriguez's filmography has a split personality. He might be best known for action films with a lurid roadhouse edge - Sin City, Once Upon a Time in Mexico, Desperado and his startling 1992 indie breakthrough, El Mariachi - but his greatest commercial success has been in cheeky family films.

His three Spy Kids movies, all fluorescent-bright espionage fantasies, pulled in a collective $US465 million ($NZ665 million) worldwide, despite being made on budgets of less than $US39 million each.

After 13 feature films, Rodriguez still has the puppy-dog enthusiasm that got El Mariachi made for $US7000, which he earned as a paid patient in medical trials.

Sitting at the Four Seasons, he stared down at his cowboy boots as he tried to remember all the things he is working on, which include a Predator reboot, the B-movie-minded Machete, a Red Sonja film, a Sin City sequel, a live-action version of The Jetsons and a fourth Spy Kids entry. The plan is to make all of them far from the Hollywood machine.