Bringing the house down 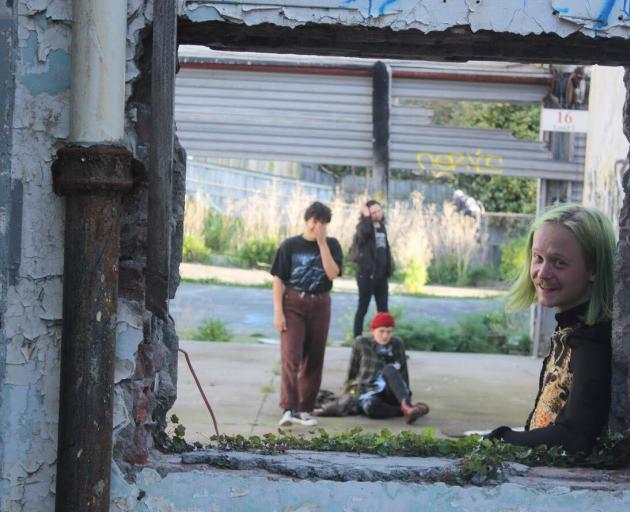 Formed when members of Beatcomber, Goya and Mothers Dearest met up for a spontaneous jam, the (super?) group has been kicking around Wellington's underground for the past few years. Now they're bringing their lineup to the South Island for the first time.

I spoke to two of the five members, vocalist Joel Cosgrove and bassist Kelsi.

"I think it's hipster ironism in that none of us can really play metal," says Joel, "Jed [guitarist] can chuck out some riffs and that's about it, so it's this kind of idea that like it's this real puritan sort of earnestness that we can't meet, so we kind of want to destroy ourselves because we're false metal."

In reality it turns out they're actually more of a punk band.

"We use the term bubble punk, it's sort of open ended. What do you think Kelsi?"

"I just kind of say punk when people ask and I kind of have no idea, it's really hard to describe ..."

It's even harder for me to describe because they haven't released any studio recorded music yet. Joel reckons the group's first EP should be out later this year, until then they're in that cool phase where your only chance to experience them is live.

"A lot of our songs are sort of like tongue in cheek, just real profane songs about ... Jesus and stuff."

Joining them at the gig will be The Rothmans, who Joel saw playing at a Wellington house party, where the floor literally collapsed.

"That was crazy, I've never seen anything like that.

"I had a friend who was at the back of the room, and he was like suddenly I could see the band and I knew something was really wrong."

Luckily, the floor at The Crown Hotel has withstood many punk onslaughts over the years because DAFM gigs are known to be pretty bouncy, too.

"The energy just gets really up and Joel interacts with the crowd and it's a lot of fun," says Kelsi.

Joel adds: "I guess we're just really excited to come down to Dunedin. I've played Chick's a couple of times and that was always the best time ... Dunedin crowds, and Christchurch crowds as well, are sort of like, yeah, it's always really fun."

Destroy All False Metal plus The Rothmans and Diana, tonight (October 27) at 9 o'clock at The Crown Hotel.

- For more from Fraser Thompson, go to dunedinsound.com